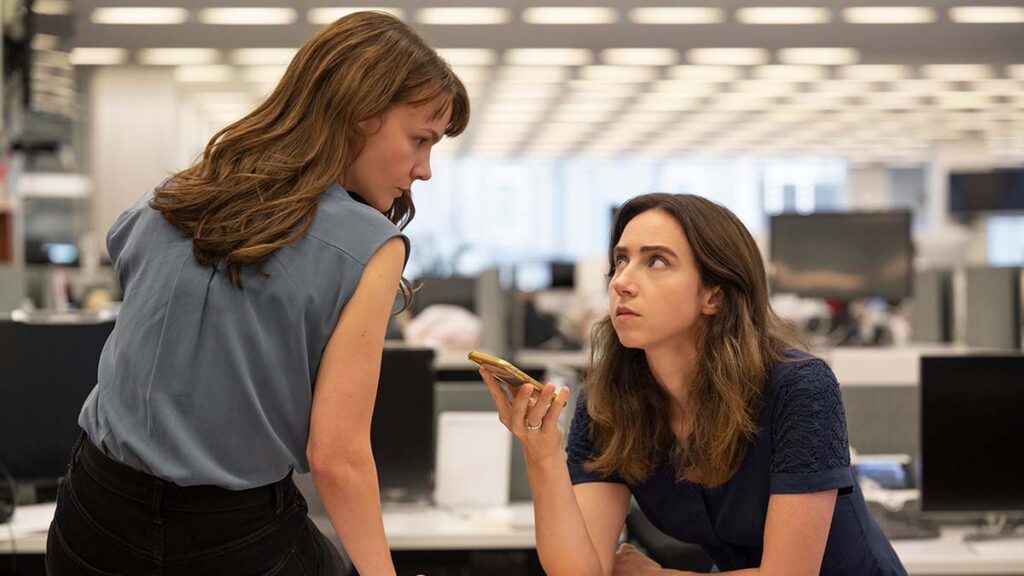 After impressing on the film festival circuit around the world, including a stint at this year’s London Film Festival, director Maria Schrader’s brilliant drama ‘She Said’ finally arrives onto UK shores. An engrossing and immediate story featuring two outstanding leading turns from both Zoe Kazan and Carey Mulligan, ‘She Said’ is a very important movie, and one that deserves a larger audience. News that this release has gone largely unnoticed in America is disappointing to hear, given how damaging these truths are to both Hollywood and the whole system that is built to protect the perpetrators of these abuses. Hopefully the global audience will come to see this movie en masse, as it’s a very compelling and crucial film.

Based on the true story of how the ‘Me Too’ movement came to be thanks to the tireless efforts of two New York Times investigative journalists, ‘She Said’ follows Jodi Kantor (Zoe Kazan) and Megan Twohey (Carey Mulligan) as they work on breaking the story of a big Hollywood producer who has gotten away with years of inflicting sexual abuse, harassment and intimidation. A known secret within the industry, Kantor and Twohey struggle to find victims who are willing to name him, but as their investigation broadens and more victims come forward to tell their stories, it becomes clear that they can mount a proper case against Miramax head Harvey Weinstein and finally bring him to justice.

Based on Jodi Kantor and Megan Twohey’s book ‘She Said’, and derived from their investigative piece with Rebecca Corbett, the movie screenplay from Rebecca Lenkiewicz does a remarkable job in setting the scene very quickly and gives us a good insight into both Kantor and Twohey’s personal lives too – something which helps the audience fully invest into the story and their plight. There’s a lot of narrative to get onscreen in a fairly short runtime, but it does a stellar job in portraying the key elements of the case and tries to include as much information as possible.

Given the scale of this case, the investigation, and its ramifications, I feel like ‘She Said’ would have worked much better as a HBO-style series, with more time given to delve further into the details. This is a story that has to be known widespread and I don’t think 129mins does all its hard work justice. After seeing the film, there’s still a lot of narrative that I would have liked to have seen played out. It’s a testament to the quality of the production that you want to see more, and I think shows like ‘Dopesick’ proves that stories of this kind truly benefit from a broader narrative canvas.

With word that ‘She Said’ hasn’t drawn in big audiences stateside, there’s a separate conversation to be had about awards-season fare and their calculated releases. ‘She Said’ tackles a relevant and ongoing problem head-on, and it’s an important story to get out there. This movie certainly has awards season buzz around it, but its release so close to Christmas seems to be detrimental to its success. A time when people are understandably busy with their Holiday preparations, and with family films usually the order of the day, I think the decision to release this so late in the year just to keep it in the conversation will ultimately hurt this film from reaching the audience it deserves. It’s a shame awards panels seem to have such short memories when it comes time to form their nominations – seemingly not looking past the previous 4 months.

‘She Said’ is a very compelling movie with standout performances and tells a very complex story well, and with a great attention to detail too. I’d have liked to have seen this expanded, because there are elements that understandably felt rushed under the constraints of a movie runtime, but even so, ‘She Said’ does an excellent job in bringing us the facts and shining a telling light onto the heinous abuse and harassment experienced by so many in the industry. Zoe Kazan and Carey Mulligan hand in amazing leading performances that stay with you long after the credits roll, and with an ensemble including heavyweights like Patricia Clarkson, Andre Braugher, Peter Friedman, Samantha Morton, Ashley Judd and Jennifer Ehle, you are guaranteed a masterclass in acting. ‘She Said’ is definitely worth your time and attention.