Sneaker king James Whitner: ‘I’m curating how I want to visualise my life’ 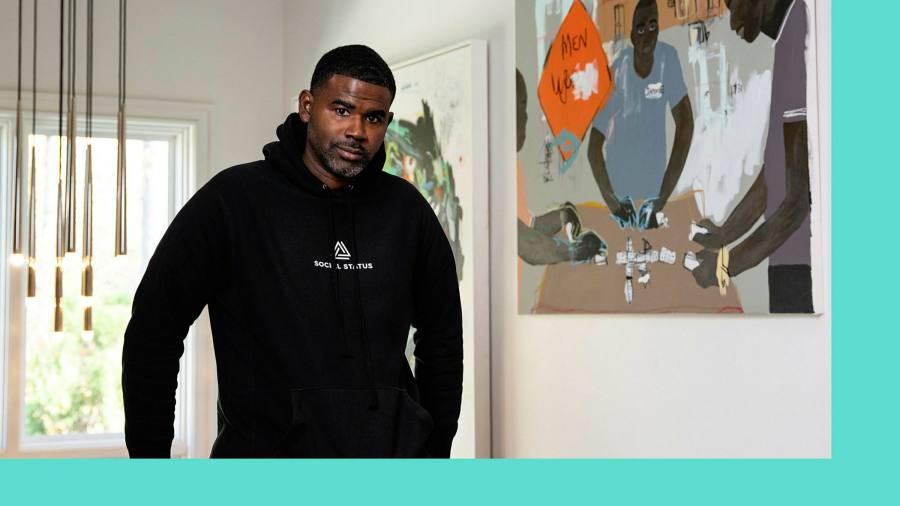 Nothing in James Whitner’s background could have prepared him for where he is now. He grew up in a tough neighbourhood in Pittsburgh during the 1980s crack-cocaine epidemic, with parents who battled addiction. Some of his childhood friends were later incarcerated or murdered, and as a college student he did jail time for selling drugs.

“While I was sitting in a federal prison, I had a lot of time to think about my life. I was at a crossroads, and I had two roads to walk,” he says over Zoom, speaking from Charlotte, North Carolina, where he now lives. “At that point I knew who I didn’t want to be; I didn’t know yet who I wanted to be.”

He wrote a business plan while in jail. Having studied business administration at Edinboro University of Pennsylvania (he graduated in 2003), he went on to found the Whitaker Group, which now runs street fashion brands such as Social Status and A Ma Maniére, boutique hotels and a restaurant, and has a separate arm for community-based social impact projects.

As part of his streetwear division, Whitner, 43, has married art with sneakers, for instance asking Nina Chanel Abney, one of his favourite artists, to design a Chuck Taylor sneaker. The model attracted vice-president Kamala Harris, who visited the Social Status store in Charlotte while on the campaign trail.

I tell Whitner I know nothing about sneakers, and he laughs out loud and interjects: “I love the fact we’re not going to talk about sneakers!” And when I say, Let’s talk about art, he gets really animated — “Yes, yes, yes!” His engagement started almost 10 years ago, with a purchase of four KAWS sculptures. “I was enamoured by the connection with street culture and how it connects to fashion, to black culture. I just had to have them,” he says.

I wonder if, growing up in the projects, this taste was influenced by the graffiti and street art all around him. But he denies this, saying he was more focused on basketball — and on survival — then.

Still, for a few years he was a huge collector of street artists such as Todd James, Eric Parker and Peter Saul. “And then very quickly I had to decide my perspective and engagement with art,” he says. In this he was guided and influenced by the gallerist and president of Pace Prints, Jacob Lewis, who encouraged him to think about the legacy of his collection. “I started to reflect about what it would represent, what it would mean.”

So he moved on to buying more broadly, starting with a Pat Phillips piece and continuing with Abney, Mickalene Thomas and Mark Bradford among others. “I can’t afford a ton of Mark Bradfords!” he laughs, so he engages with up-and-coming names who have not made it (yet) into the stellar Bradford category.

Works by Jammie Holmes, Julian Gaines, Marcus Brutus, Dana Schutz and Daniel Arsham have joined his collection, which he says now comprises more than a hundred pieces. It is partly displayed in his home, but much is crated in his office and warehouse. “We are working on this — because I need to create more meaningful secondary storage,” he says.

Two words come up repeatedly in our conversation: “meaningful” and “curated”. Whitner doesn’t consider himself a collector because he sees collecting as hoarding; rather, he says, he “curates”. “You can’t curate if you are storing. It’s important to share in a meaningful way . . . I’m curating how I want to visualise my life and how I want others to see my world.”

Does he exclusively buy black artists? No: “I have [non-black] artists too — for instance I have two pieces by Anna Park, I have Tomoo Gokita and the late Joyce Pensato, whose work I love because her imagery is so relevant to me — Homer and Lisa [Simpson] were prominent figures in my childhood.”

I ask how and where he gets his information and guidance in art, how he discovers talent, and his answer doesn’t surprise me: “Social media!” He explains: “I am part of at least 20 text message groups, we discuss current affairs and culture and often the discovery of an artist will come from that group, or from other artists.”

Whitner, who has two children, aged 10 and 15, is a man on a mission. “Three or four years ago I was not so mindful [of my actions],” he continues, “but now I have a responsibility, to my children, to my family, because I have been blessed with so many opportunities.” He sees this mission as improving the lives of other black people, especially in Pittsburgh. “My challenge is to break down the invisible wall and make diversity more meaningful,” he says. Recently he opened an art gallery and two new community centres there.

“Museums are often not very welcoming to black folks; that’s one reason why we opened the gallery. Before, there weren’t any black galleries in the city,” he says. “The goal is to encourage arts in a place like Pittsburgh — which doesn’t have a path for art for black folks or indeed any paths for black people.”

Last year he split the Whitaker Group into two parts: the for-profit retail division and the non-profit Whitaker Project, which has a social focus. “We are trying to invest back into the people we serve as consumers,” Whitner says. “The project is about empowering the black community and uplifting that community.”

I ask one final question: what artwork would you like to own above any other?

“No question, a Basquiat,” he says. “It’s not just about the art. You heard my story, you can see how I connect to his struggle. Of course, I appreciate his work as an artist, but I also connect with his story on so many other, different levels.”

A Guide to Tepoztlán, a Sacred Mexican Town Where Aesthetic Delights Abound

How we remember the Beatles: Vir Sanghvi on Peter Jackson’s Get Back

An Upcycle Collaboration For Circularity In Luxury Fashion

Climate change: Rainfall could replace snowfall in the…