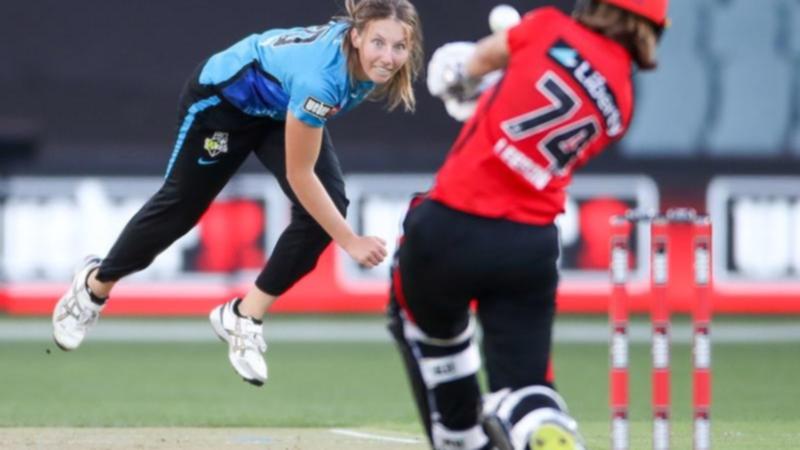 The Adelaide Strikers have belted their way into the WBBL final with a crushing nine-wicket win over the Melbourne Renegades.

The home side dominated Thursday night’s ‘Challenger’ match at Adelaide Oval from the outset and never relented, bringing up the victory with 55 balls to spare.

After winning the toss and electing to field, the Strikers restricted the Renegades to a paltry 8-83 – the fourth-lowest total in their history – to book their spot in Saturday night’s decider against the Perth Scorchers.

Strikers openers Dane van Niekerk (43) and Katie Mack were intent on having as much rest as possible before the final, treating the Renegades’ demoralised bowling attack with disdain.

Van Niekerk copped a nasty hit to the hand but managed to bat on before being caught 12 runs short of the target.

The Renegades were immediately under pressure, with Strikers quick Megan Schutt (2-23) on song from the first ball of the match.

It did not get any better for the Renegades as all Strikers bowlers got in on the action.

Not even Indian star Harmanpreet Kaur, who was named as the tournament’s leading player, could rescue the Renegades as she was trapped lbw for seven.

Renegades captain Sophie Molineux did not bat after opening for much of the tournament and she is believed to be carrying an injury.

Denial of responsibility! Pedfire is an automatic aggregator of the all world’s media. In each content, the hyperlink to the primary source is specified. All trademarks belong to their rightful owners, all materials to their authors. If you are the owner of the content and do not want us to publish your materials, please contact us by email – admin@pedfire.com. The content will be deleted within 24 hours.
CricketSport
0
Share

Godzilla and Titans Kaiju TV Series in Works from Apple,…

2022 Grammy Awards rescheduled, to be held in Las Vegas for…