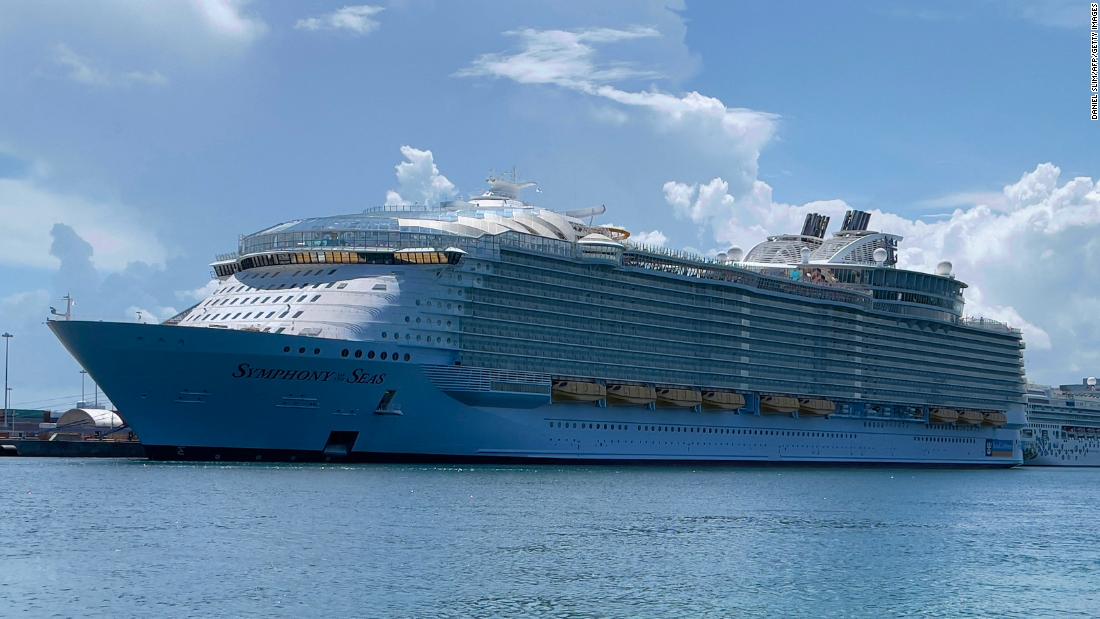 (CNN) — Despite stringent measures supposed to keep ocean cruises Covid-free, operator Royal Caribbean says at least 48 people on board one of its ships that docked in Miami at the weekend have tested positive for the virus.

The Symphony of the Seas, the world’s biggest cruise ship, was carrying more than 6,000 passengers and crew on a week-long journey around the Caribbean when a guest tested positive, prompting wider contact tracing, according to Royal Caribbean.

Cruise ships had been touted as the one of the “safest” vacations available back in summer 2021 when the cruise industry restarted in the US with new Covid protocols, following an extensive pandemic shutdown.

The Symphony of the Seas  was carrying 6,091 passengers and crew members. In a statement, Royal Caribbean said that a guest tested positive during the voyage, and subsequent cases were detected following contact tracing.

It’s not yet known whether the highly infectious Omicron variant of coronavirus, currently spreading rapidly around the world, was responsible for the cases detected.

Royal Caribbean rules dictate that all travelers on board a ship aged 12 and above must be fully vaccinated, and test negative before departure. The cruise line says it “strongly recommends” guests receive a booster dose prior to sailing, but this is not currently mandated.

Crew members are also required to be fully vaccinated and test “at least once a week.”

Unvaccinated children on board Symphony of the Seas were required to show a negative PCR, and also test negative at the terminal pre-departure.

Royal Caribbean says it also implements additional health and safety measures, such as enhanced cleaning. On US-based cruises, masks are now required to be worn in indoor public areas — this policy was recently updated to extend mask-wearing requirements for fully vaccinated passengers.

“Each person quickly went into quarantine,” reads a Royal Caribbean statement on the Symphony of the Seas outbreak. “Everyone who tested positive were asymptomatic or had mild symptoms, and we continuously monitored their health.”

The cruise line says in its statement that it disembarked six positive cases earlier in the cruise, while the other positive travelers disembarked on December 18, when the voyage came to an end.

The cruise line added that Symphony of the Seas’ future voyages weren’t impacted.

Cruise Lines International Association (CLIA), the industry body that represents the world’s major cruise lines, said in a statement provided to CNN Travel that it was “monitoring developments related to the Omicron variant and remain closely engaged with local and national authorities in the places where cruises sail.”

CLIA said that on board protocols like testing, vaccination and mask-wearing “were designed with variants in mind.”

The association added that its member cruise lines will continue to take a “proactive approach” to responding to the pandemic as it develops.

Earlier in December, a spate of positive Covid cases were reported on board Norwegian Cruise Line ship Breakaway, which was traveling out of New Orleans.