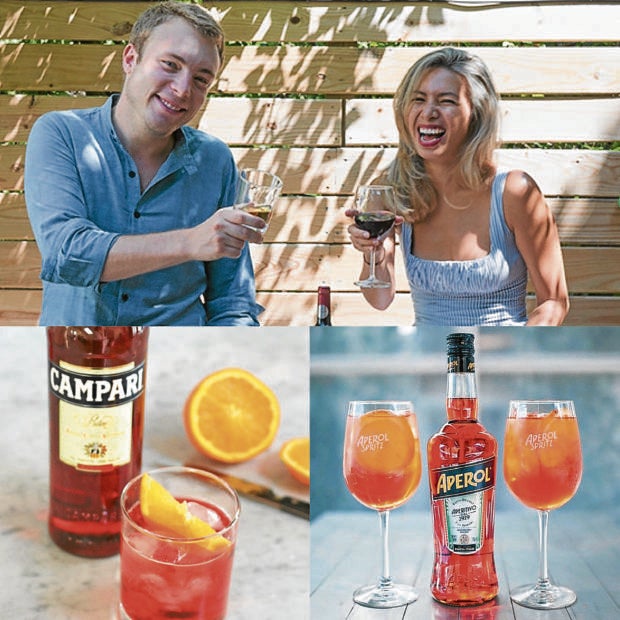 I have gotten this far in this trying year only by the grace of the Spirit … and spirits.

I started with gin around March. I needed something stronger around April-May, so I switched to whiskey. I kept it sane with reds and whites in the third quarter. And lately, I’ve been in the mood for dark beer, so I’m appreciating Kozel.

But this has been stress-drinking.

Meanwhile, over at The Tasting Club, the drinking is way more refined.

Kevin and Adrienne Charuel founded The Tasting Club in New York City in 2016, then brought it to Manila in 2018 (he is French and she is Filipina).

The Tasting Club hosts tasting events. The menu and drinks are curated by Kevin and Adrienne, sometimes with other expert help. They used to have the events in restaurants or bars until the lockdown happened.

But the pandemic did not bring down their spirits.

Kevin and Adrienne forged on with their mission to educate enthusiasts and satiate gastronomes, so they proceeded with Zoom tastings.

Later that month, they hosted a Remy Martin virtual masterclass on cognac. This was in cooperation with the French Chamber of Commerce and Industry in the Philippines.

After wines and cognac, they proceeded to gin, with a guest speaker this time, Matthew Westfall, master distiller of Full Circle Craft Distillers who spoke about the production process of locally handcrafted ARC Gins.

The Art of Italian Aperitivo

On Nov. 21, they featured the art of Italian aperitivo.

Sergio Boero, president of the Italian Chamber of Commerce in the Philippines, explains aperitivo comes from the Latin word “aperire,” which means “to open.”

“This captures the very essence of what the tradition of the Italian aperitivo is: to come together, to open up, to have good conversation and stimulate the appetite,” he says.

“The Italian predinner ritual of aperitivo is an art form,” Boero adds. “In fact, the aperitivo—which is our term for having a light drink and snack ahead of dinner—is one of my favorite traditions … The idea of having an aperitivo is about preparing yourself for dinner—to stimulate or whet your appetite. It’s a tradition that we think began around the late 18th century. Since then, it has evolved into Italian life seamlessly.”

Italians will think about having an aperitivo around 6 p.m. onwards.

“When we finish work for the day,” Boero shares, “our tradition is to sit with a drink during those two hours or so before dinner … and relax. The Italian aperitivo will usually include a glass of wine or a cocktail, along with some light snacks. For most of us, it will have been some time since lunch, and many of us will not sit down for our main meal until around 8 p.m.”

The origin of Italy’s predinner drinks culture is difficult to trace, admits Boero. However, the rise of the popularity of the aperitivo culture, i.e., a predinner cocktail hour, is believed to have followed after Antonio Benedetto Carpano from Turin, who invented the “modern vermouth,” made from white wine, with an infusion of herbs and spices and sweetened with spirit.

Some compare aperitivo to the American happy hour, but the Italians are quick to clarify that it is more than that.


The purpose is not just to get happy early; the primary reason is still gustatory. It is to stimulate the appetite, hence the use of amaros and bitters, vermouths and dry fortified wines, which can be served with a splash of soda, chilled, or as part of a predinner cocktail.

Today the word aperitivo (or aperitif for the French) is also sometimes used to refer to a genre of drinks that are light, dry or bittersweet, intended to awaken the appetite before a meal. Some of the most classic Italian cocktails like the Negroni, the Bellini and the Spritz come from this tradition.

Boero explains that typically, an aperitivo drink is low in alcohol and served with soda water. These include bitter liqueurs, which are often distinguished by color: either orange or red. They include drinks like Aperol (orange), Campari (red) and Cynar (red).

Then there are also aromatized wines that include vermouth, chinato and americano.

“Combining the two with a dash of soda, a top of prosecco or, as in the case of a Negroni, a shot of gin, brings to life some of Italy’s most notable and great tasting aperitivo drinks,” he shares.

Then there is also Campari.

Campari is the surname of a person: Gaspare Campari who lived in the 1800s. Though born in Lombardy, he sold a bittersweet-style aperitif in Italy, then formulated what we know today as the drink and brand Campari, which allegedly has more than 60 natural ingredients including herbs, spices, barks and fruit peels.

In his later years, Campari opened a cafe, which became very popular, in front of the Milan Duomo. His sons then took over the business, which became Davide Campari Milano and Gruppo Campari.

Next week, the Tasting Club will up their game with a three-course menu prepared by French chef Cyrille Soenen, maitres cuisiniers de France (French master chef).

He is preparing a crab bisque, beef brisket Bourguignon-style and his much-loved Kouign Amann but with a twist of chocolate and ginger. They will be pairing these dishes with French wines.


Registration is P2,950 for a tasting set that will be delivered to your home, along with samplers of the wines. A pairing dinner presentation via Zoom will follow on Nov. 28 at 7 p.m.

I must confess that I would sign up for this not for the wines but for the food, as chef Cyrille’s cooking is excellent (some of you might remember him from his Intercon days) and his cooking is one of the luxuries I miss most in quarantine.

Bravo to the Tasting Club for setting this up. This is a brilliant way to feel like you are enjoying fine dining even while in lockdown; to have human interaction while safely at home.

Jhunjhunwala, Ambani, Dhoni & much of D-Street awaiting these big-bang IPOs