The Iconic Science Fiction of Planet Comics #1, Up for Auction 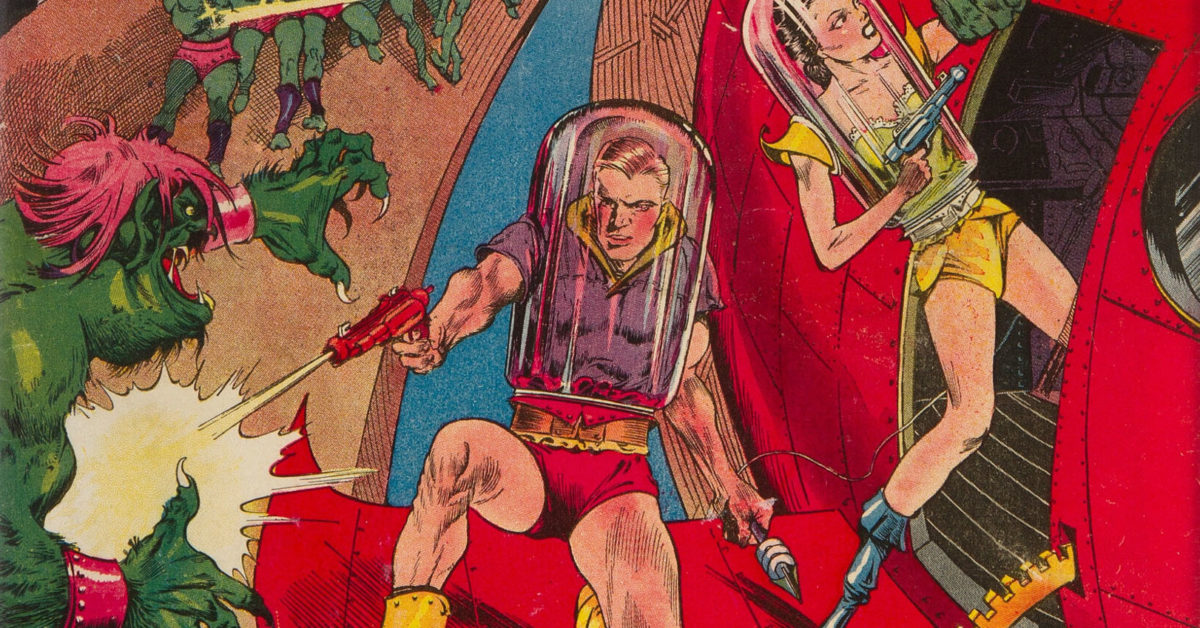 Lasting 73 issues from January 1940 to Winter 1953, Planet Comics is the most important science fiction title in American comic book history.  Almost 70 years after the conclusion of that run, the title continues to have an impact on mainstream pop culture.  It’s the go-to example for science fiction comic book art and imagery, with countless classic covers over the course of its 13-year run.  The first issue of this iconic series also features a cover by legendary artist Lou Fine, and there’s a Planet Comics #1 Trimmed (Fiction House, 1940) CGC Apparent FN/VF 7.0 Moderate (A-3) Off-white to white pages up for auction in the 2022 October 13 The Fiction House Showcase Auction #40199 at Heritage Auctions.

After launching Jumbo Comics in 1938, longtime pulp publisher Fiction House followed up with a number of comic titles that were counterparts of some of their pulp titles.  Fight Stories led to Fight Comics, Jungle Stories to Jungle Comics, and Wings to Wings Comics.  Notably, Fiction House was not known for science fiction material up to this time, and the concept for the Planet Stories pulp and Planet Comics were planned out at the same time in 1939.  Based on Library of Congress copyright records, Planet Stories hit newsstands around October 10, 1939 — about three weeks before the November 1, 1939 debut of Planet Comics.

1939 was an important year for the increasing popularity of science fiction.  The first World Science Fiction Convention was held July 2-4 in New York City that year, attended by a number of figures who would subsequently loom large over the development of the comic book industry.  But it was the 1939 New York World’s Fair with its theme, “The World of Tomorrow” which would heavily influence a number of comic book titles and features.  Aside from the well-known promotional connections that some publishers held in conjunction with the fair, like DC Comics’ New York World’s Fair 1939 comic book, and “Superman Day”, and Fox Feature Syndicate’s “Blue Beetle Day”, various science future-themed exhibits at the fair influenced the contents of comics as well.

For example, Perisphere Payne from Fox Feature Syndicate’s Science Comics is obviously named after one of the most famous symbols of the fair — the Trylon and Perisphere. The character Electro from Science Comics #1, which launched two months after Planet Comics, was also likely inspired by the New York World’s Fair.  Elektro, the robot created by Westinghouse Electric Corporation was one of the most famous exhibits at the fair. He was used by Westinghouse as a walking, talking advertisement of sorts, and a symbol of the modern wonders of electrical power.  Science Comics #1‘s Electro was also symbolic of such wonders — so much so that his mastery of electricity reminds one of Magneto’s absolute control of magnetism. Unfortunately for Victor Fox, his version was not the only comic book Electro inspired by the Westinghouse robot.  Marvel’s Electro debuted in Marvel Mystery Comics #4 — which beat Science Comics #1 to the newsstands by a mere two weeks.  With Marvel’s version more inspired by the robotic aspect of Westinghouse’s Elektro rather than the notion of electrical wonders like Fox’s version, it seems likely that Marvel and Victor Fox came to a simple agreement.  Fox’s version of Electro was renamed Dynamo with Science Comics #2.

An example of the fair’s influence on Planet Comics can be seen in artist Dick Briefer‘s title splash of The Planetary Adventures of Flint Baker and the One-Eyed Monster Men of Mars in issue #1. The launch site for Flint’s rocketship seems inspired by legendary industrial designer Raymond Loewy‘s vision of a rocket port of the future for the Transportation Building.  Among other space-themed exhibits like the Elgin Observatory, the Hayden Planetarium featured a rather spectacular and sophisticated simulated trip to the Moon and Mars.

Despite Fiction House’s lack of previous science fiction publishing experience, with Planet Comics, the publisher caught the perfect storm of the booming comic book industry and the rising popularity of science fiction.  The result was the single most iconic science fiction title in American comic book history and a series that remains avidly collected to this day.  There’s a Planet Comics #1 Trimmed (Fiction House, 1940) CGC Apparent FN/VF 7.0 Moderate (A-3) Off-white to white pages up for auction in the 2022 October 13 The Fiction House Showcase Auction #40199 at Heritage Auctions. In addition to the items listed in this post, you can check out Fiction House titles such as Planet Comics, Jumbo Comics, Jungle Comics, Fight Comics, Rangers Comics, Wings Comics and much more. New to collecting Fiction House or want to learn more?  Bleeding Cool is doing an ongoing deep dive into the history behind Fiction House in the run-up to this auction. If you’ve never bid at Heritage Auctions before, you can get further information, you can check out their FAQ on the bidding process and related matters.

Affiliates of Bleeding Cool buy from and/or consign to Heritage Auctions.

Want to buy a house in California? What starter homes look like