The physics behind Santa’s Christmas Eve trip around the world 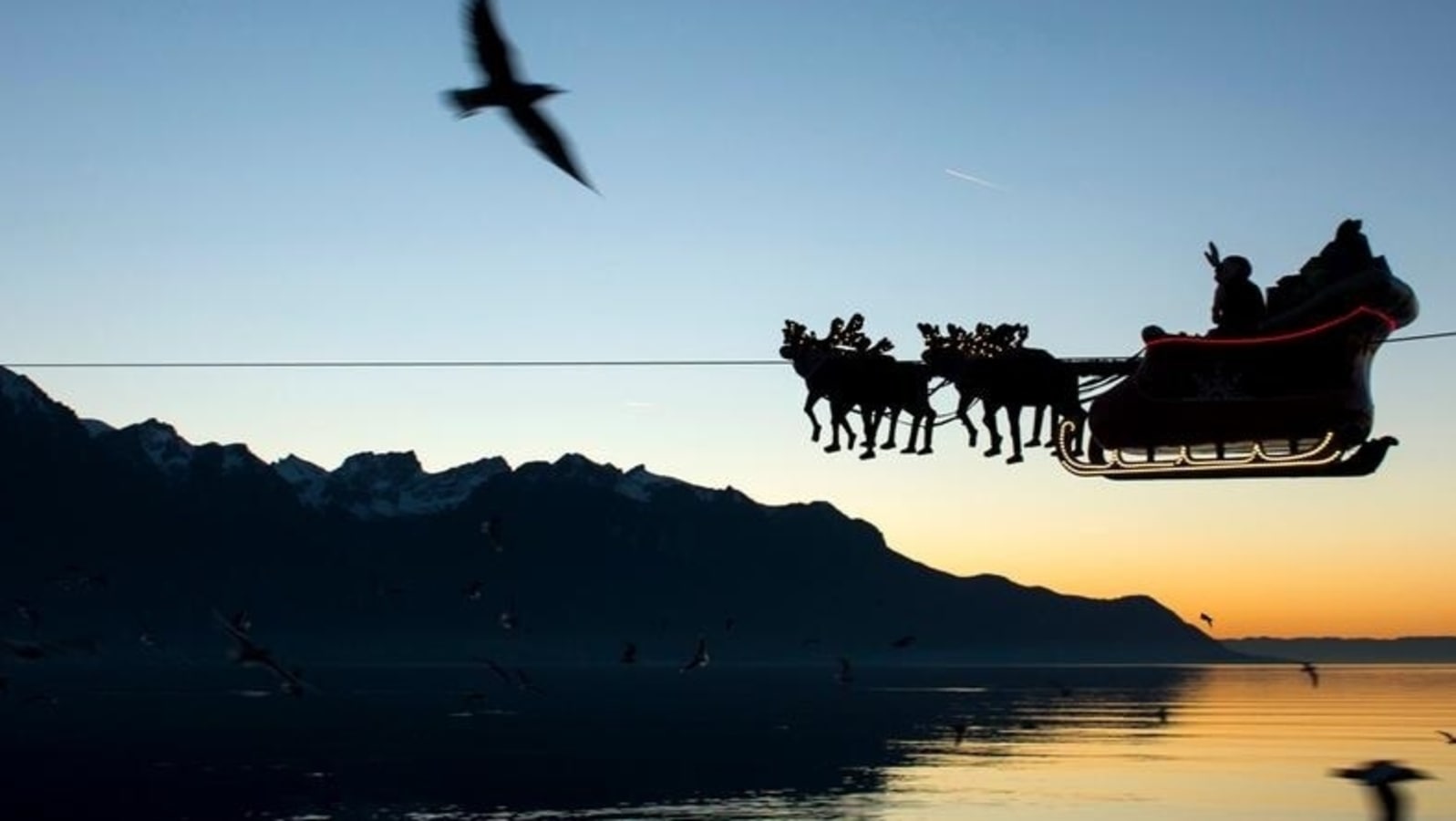 You are in the North Pole on December 24 and your alarm rings. You put on your red pants and coat, both trimmed with white fur, and your black leather boots and belt. You top the ensemble off with a red beanie and scuttle out the door. (Also read: Letters to the Christkind or Santa Claus)

It’s Christmas Eve and the presents won’t deliver themselves. Santa needs to come to town. Every town.

How does one go about delivering presents to every child on Earth in one night?

Thanks to your superb scientific skills and numeric mindset, you are able to make pretty good estimates and approximations of the dimension of the task.

How many children does Santa need to visit?

First you check how many kids you will need to visit. There are about 2.3 billion children in the world today, according to UNICEF. But not all believe in Santa Claus, so you research the number of children in each country where Santa traditions are held.

You run the numbers and come up to between 500 to 900 million kids (estimates here vary greatly) anxiously awaiting the arrival of the fat, old, bearded man. Assuming, of course, that they all behaved well.

Let’s take the highest number, because we wouldn’t want to risk leaving any child behind, right?

But more than one child can live in the same household, so to make your life easier, you say there are on average 3 children per household. That’s about 300 million homes to visit.

How much time does Santa have?

Because of the Earth’s rotation, Christmas Eve starts at different times depending on where you are in the world. The first place on Earth where Christmas Eve begins would be in Kiribati, a country made of many islands in the Pacific Ocean. Its eastern islands are 14 hours ahead of the Coordinated Universal Time (UTC) at the border of the International Date Line.

Because you are so clever, you decide to take advantage of time zones and the rotation of the Earth moving from east to west, so you get 24 hours of extra night to deliver. What a relief!

However, some say Santa can stop time and take it slow on his deliveries. So perhaps you don’t have to worry at all.

How fast should Santa go?

You run the math and the result tells you that in order to visit every house on your list, you will need to travel at a speed of around 1,500 kilometers (930 miles) per second, as calculated by a group of physics students from Leicester University in the UK.

That’s close to 0.5% of the speed of light — like traveling from Los Angeles to Seattle in a second! It seems a bit too much to ask of your faithful flying reindeer.

For some context: The world’s fastest spacecraft, the Parker Solar Probe, achieved a speed of 163 kilometers per second — still almost a hundred times slower than Santa.

The record for the fastest crewed plane here on Earth tallies us to some 7,270 kilometers (4,520 miles) per hour — around 750 times slower than Santa.

But it’s not just speed. You also need to remain invisible.

Because you are Santa, you might be able to use some of the phenomena that occur in the quantum world to your advantage, like being in a state of quantum superposition, which would allow you to be in all 300 million households at the same time.

Perhaps that’s the reason why kids are not supposed to sneak in at night to try and catch Santa. In a state of quantum superposition, another person observing you would cause the wave function to collapse.

When that happens, you would fall out of superposition and instantly appear at a single household.

Christmas would then, of course, be ruined.

How heavy are the goods?

And you can’t forget about the presents.

Gifts for 900 million children is hefty cargo. To get an idea of just how heavy Santa’s sleigh is, let’s suppose each child receives a teddy bear weighing an average of 1.3 kilograms (3 pounds).

That evens out to a bit more than a million tons. That’s like carrying almost 6,000 blue whales, the largest animal known to have ever existed.

Moving such a heavy cargo at 1,500 kilometers per second would require huge amounts of energy, and let’s not even think about how air resistance would burst your reindeer and sleigh into flames almost instantly, just like when small meteoroids reach our atmosphere and appear to us as shooting stars.

But it’s been said you have a magic bag. So, all good.

Denial of responsibility! Pedfire is an automatic aggregator of the all world’s media. In each content, the hyperlink to the primary source is specified. All trademarks belong to their rightful owners, all materials to their authors. If you are the owner of the content and do not want us to publish your materials, please contact us by email – [email protected]. The content will be deleted within 24 hours.
Christmaschristmas eveChristmas traditionsGoodsHow many children does Santa need to visit?Merry ChristmasNorth Polesanta claus
0
Share

What happens if England lose against France – are they out the World Cup? | Football