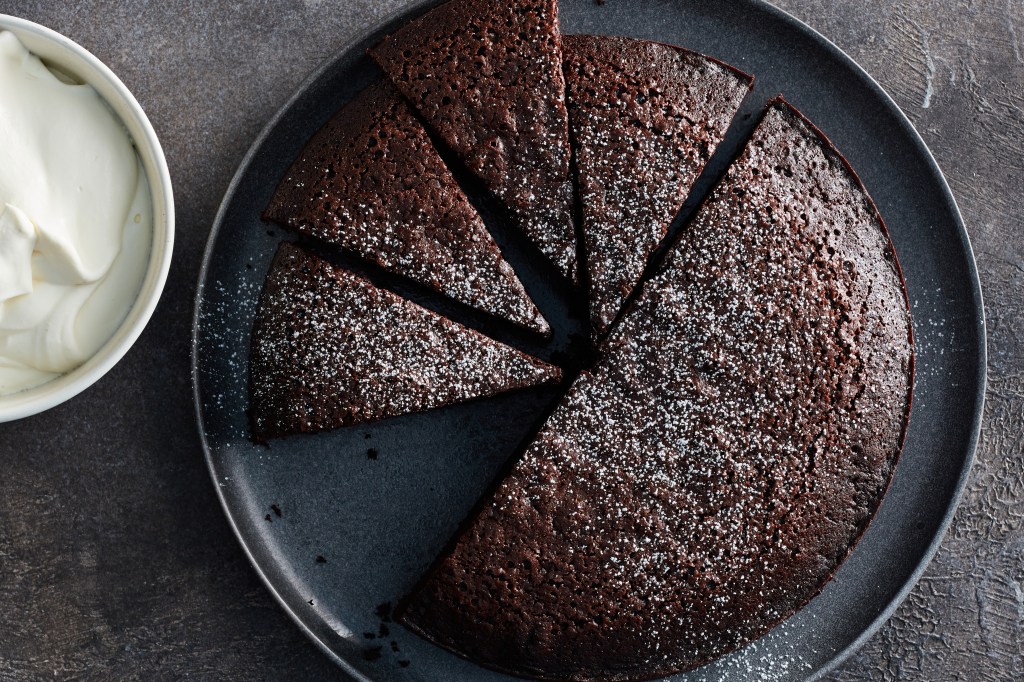 Every winter, I look forward to reveling in the fried food frenzy of latkes and jelly doughnuts called sufganiyot that is Hanukkah in my home. But, after a few grease-splattered days, I’ve had enough. Not of Hanukkah — that goes on for eight gelt-filled nights — but of frying. The question is, what else can I serve to celebrate the holiday?

This year, I plan to lean into the oil part of the story, specifically the olive oil that burned for eight days instead of just one, the miracle that the holiday commemorates. But along with using oil for frying, I’ll make some festive, holiday-worthy confections.

Olive oil is already traditional in many desserts, adding a slightly savory note to round out the sweetness. Here, I played with three classic recipes, blending olive oil into one, incorporating chocolate into another and leaving the third alone but for a tweak in the topping.

One thing to keep in mind when using olive oil in desserts is the brand. An assertively grassy oil can be so delightfully pungent on crostini, but could be overpowering in cake. And neutral “light” olive oil won’t contribute enough of a flavor to warrant the price. I recommend finding a mellow extra-virgin oil with herbal notes, the good, everyday kind you’d drizzle into salad dressing but wouldn’t use as a finishing oil.

The first dessert I riffed on was a moist olive oil cake, spiking it with cocoa to make it fudgy and intense. Instead of dissolving the cocoa in hot water, I used Earl Grey tea, which gave it a citrusy perfume. I also tried red wine, coffee, orange juice and ginger tea, and they all stepped in nicely. Feel free to experiment to make the cake your own.

Next, I substituted olive oil for butter in my favorite lemon curd recipe. It worked perfectly, resulting in a lighter, brighter-tasting curd that was still thick and silky. Use it mounded into a tart shell, as a cake filling, piled in a Pavlova or served topped with berries and maybe a little whipped cream.

Finally, I baked a batch of melomakarona, the classic Greek holiday cookies made with olive oil and honey. Most recipes call for walnuts as a topping, but any nut works, and green pistachios lend a bit of color.

You could serve any of these after the latkes, for dessert. Or make them year-round, because olive oil desserts are always worth celebrating.

These classic Greek holiday cookies are made from a combination of olive oil and semolina. This gives them a cakelike texture that’s crumbly yet still very moist, thanks to a soak in a fragrant, honey-sweetened syrup spiked with cinnamon and orange. Traditionally topped with chopped walnuts, you can use any nuts you like; pistachios are especially pretty with their pale green edges.

1. Make the syrup: In a medium saucepan over high heat, combine sugar, cinnamon sticks and clove with 1 1/3 cups water. Cut orange in half and place in saucepan, flesh down. Bring to a boil, stirring occasionally, until the sugar completely dissolves, about 4 minutes. Remove from heat and stir in honey. Set aside to cool completely, leaving the cinnamon, clove and orange in the syrup until ready to use.

2. Heat the oven to 375 degrees and line 4 baking sheets with parchment paper or nonstick liners, or lightly grease the pans with olive oil.

3. Finely grate the zest of 1 orange into a large mixing bowl. Cut the orange in half and squeeze the juice into a measuring cup. If it doesn’t measure 1 cup (240 milliliters), squeeze in enough juice from the other orange. Add juice to the bowl with the zest, then mix in olive oil, sugar, brandy, cinnamon, nutmeg, clove and salt.

4. In a separate mixing bowl, whisk together flour, semolina and baking soda. Gradually, fold in the flour mixture into the olive oil mixture. With a wooden spoon, mix until flour is just evenly incorporated.

5. Using your hands, roll dough into 1 1/2-inch ovals or egg-shapes, and place 1 inch apart on prepared baking sheets. Using the palm of your hand, lightly flatten dough. Bake until cookies are golden, 20 to 25 minutes, rotating baking sheets halfway through for even baking.

6. Right before the cookies are done, remove the orange, cinnamon sticks and clove from the syrup. As soon as the cookies are out of the oven, and working in batches, dunk the hot cookies in the cool syrup, gently flipping them for about 10 seconds so they can absorb the syrup. Remove cookies from the syrup using a slotted spoon and arrange them on a tray or plate. Sprinkle the center of each cookie with a generous pinch of nuts, patting them lightly so they stick to cookies.

7. Once cool, store in an airtight container at room temperature for up to 5 days. To prevent the cookies from sticking together, place sheets of wax or parchment paper between cookie layers.

This tender chocolate cake has a deep cocoa flavor that’s intensified by the slight bitterness of olive oil. Cinnamon adds a touch of spice here, and the Earl Grey tea, a mellow citrus perfume. Feel free to play around with the hot liquid used to dissolve the cocoa powder: Coffee, red wine, orange juice or any other flavorful tea will add their own notes to the cake, while water will let the chocolate shine on its own. Serve this as is, or with a dollop of whipped cream or some ice cream on top.

1. Heat the oven to 325 degrees. Grease a 9-inch round pan and line the bottom with parchment paper.

2. In a medium saucepan over high heat, bring tea or other liquid to a simmer, then turn off heat. Whisk in cocoa, cinnamon and salt until smooth, then set aside to cool.

3. In the bowl of an electric mixer fitted with the paddle attachment, combine sugar, olive oil, eggs and vanilla. Beat for about 3 minutes. Reduce speed and pour in cocoa mixture, scraping down the sides of the bowl. Gradually beat in flour and baking soda until just incorporated.

4. Scrape batter into prepared pan and bake until the sides are set but it’s still slightly damp in the center, 35 to 45 minutes. A cake tester should come up clean but with a few sticky chocolate crumbs clinging to it. Transfer cake pan to a wire rack and let cake cool completely in pan.

This dairy-free version of lemon curd is lighter than more traditional, butter-enriched versions, but is just as tart and creamy. The olive oil gives it a complex flavor that can range from herbal and grassy to earthy and mellow, depending on the brand. Mound this lemon curd into a tart, use it as a cake filling, pile it onto a Pavlova, or serve it as is, topped with berries or other fruit. It keeps for at least a week in the fridge and freezes well for up to 1 month. And you can even make it in the microwave (see Tip).

1. Place the lemon juice, sugar, eggs, egg yolk, lemon zest and salt in a blender, and blend until smooth, about 30 seconds. With the motor still running, slowly pour in the oil until just combined.

2. Fill a medium saucepan with about an inch of water and bring water to boil over high heat. Transfer lemon mixture to a metal mixing bowl that can nestle into top of the saucepan without touching the water. Reduce heat to medium-low and, using a potholder or towel to protect your hands, whisk constantly until the curd thickens and looks like mayonnaise, 6 to 10 minutes. Do not overcook. (If you have a double boiler, you can use that here instead of the pot and the bowl.)

3. Remove bowl from the heat and inspect the curd. If you see hard bits of coagulated egg, strain the curd through a fine mesh sieve, pressing with a rubber spatula. (If it looks smooth, you can skip this step.) Transfer curd to a container and press a piece of plastic wrap against the surface to create an airtight seal. Let the curd cool to room temperature, then refrigerate until cold, at least 1 hour.

Tips: To make the curd in the microwave, pour the lemon-olive oil mixture from the blender into a large glass bowl and cook in the microwave, on high power, in 1-minute intervals for 3 to 5 minutes. Whisk furiously between intervals, especially at the edges. Reduce power to 70% and continue to cook for another 1 to 2 minutes (stirring every minute), until the curd thickens and looks slightly puffed and spongy. Press a piece of plastic wrap against the surface to create an airtight seal and let the curd cool to room temperature, then refrigerate.

This article originally appeared in The New York Times.

Subscribe to our weekly newsletter, In The Know, to get entertainment news sent straight to your inbox.

The War on Drugs Failed, But the Suffering It Caused Continues

Solange’s Bottega Veneta Look Will Have You Green With Envy

Surprise! Fans Are Getting Their First Look at ‘Werewolf by…

Piers Morgan rehashes old feud with Rihanna as she announces…

Who Are Alicent, Rhaenyra, and Daemon’s Kids on House…