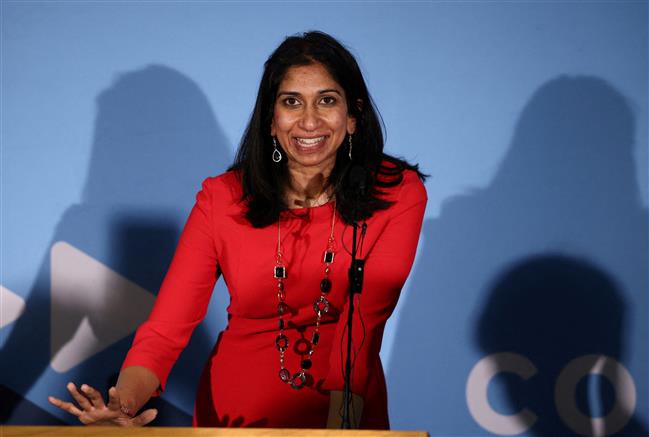 UK Home Secretary Suella Braverman met with police officers and Hindu and Muslim community leaders in Leicester and assured them that ‘thugs’ behind recent violent clashes would face the full force of the law.

During a visit to the eastern England city on Thursday, the Indian-origin Cabinet minister was briefed by the Leicestershire police chief and also leaders from local temples and mosques on the “serious disorder”, that has resulted in 47 arrests.

The disorder came as tensions since an India-Pakistan cricket match at the end of last month continued to spill over into this weekend.

“I met with the Leicestershire police officers, the temporary chief constable for Leicestershire and local community leaders to discuss action being taken to protect residents and restore safety and harmony in Leicester,” Braverman tweeted.

Will do all I can

We’ll work together on this, and I will do everything I can to support communities and our police. —Suella Braverman, UK Home Secretary

With reference to reports of a protest by masked men outside a temple in Birmingham earlier this week, the Home Secretary said she had also spoken to the local West Midlands Police chief and that the situation there continues to be monitored.

“I also spoke to Dave Thompson, chief constable of West Midlands police. I continue to monitor the situation and thank the police for their expert handling,” she said.

Her intervention follows several appeals from within the local community and parliamentarians to take action against extremist elements behind the clashes.

“These targeted attacks were by Islamist extremists and have understandably generated a vast amount of fear, harm and disruption to the wider Hindu community across the UK,” said Bob Blackman, Conservative Party MP, Chair of the All-Party Parliamentary Group (APPG) of British Hindus, in his letter to Braverman.

Apple Tries Its Own Fix for Android Message Reactions,…