Thyssenkrupp to cut 7,400 jobs after slumping to €5.5bn loss 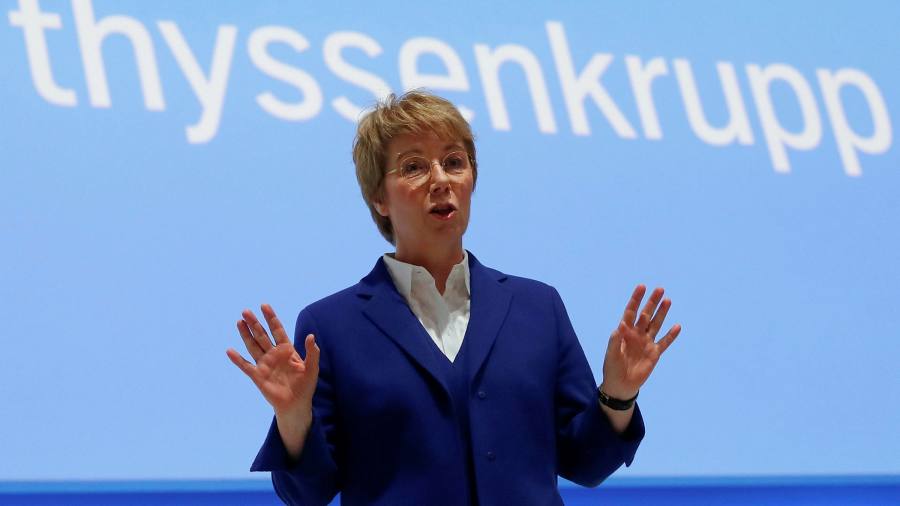 Thyssenkrupp, the ailing German steel and materials group, plunged to a full-year loss of €5.5bn and announced a further 7,400 job cuts, as the pandemic increased pressure on the former conglomerate to speed up restructuring.

The Essen-based company, which employs more than 100,000 people, also warned that it expected to slump to a further loss of at least €1bn this financial year.

Unable to escape a steady decline over the past decade, Thyssenkrupp sold its lucrative elevators business to a private equity consortium for €17bn in February, to help it pay down billions of euros in debt, and fund huge pension liabilities.

But one of the best-known names in German industry has continued to bleed cash in its remaining businesses, with free cash flow collapsing in its most recent financial year, which ran to the end of September.

Having cycled through three chief executives in 15 months, Thyssenkrupp is now under the leadership of an outsider, former Bosch executive Martina Merz, who gave up the chairmanship of the company’s supervisory board to take the executive reins in October 2019.

In May, Ms Merz outlined a deep restructuring plan that would result in nine businesses — with combined sales of more than €6bn a year and 20,000 employees — leaving the company completely, and the remaining units being run under a loose holding structure.

The extra job cuts announced on Thursday bring the total number of roles at risk to 11,000, and Thyssenkrupp refused to rule out forced redundancies.

“The next steps could be more painful than the previous ones,” Ms Merz said, “but we will have to take them.”

Last month, the group revealed it had received an approach for its steel unit, which employs roughly 27,000 people and made a loss of €946m in the last financial year, from British tycoon Sanjeev Gupta’s company, Liberty Steel. Neither company disclosed details of the approach.

The division, which has been struggling to compete with cheaper imports from Asia and elsewhere, has been hit hard by its reliance on business from the auto industry. The sector, which looks likely to contract by almost a quarter in 2020, accounts for roughly 40 per cent of Thyssenkrupp’s steel sales.

The industrial group is also in exploratory discussions with other steelmakers, including Sweden’s SSAB, and is talking to the German government about potential financing from the state, according to people familiar with the matter.

Despite having a tie-up with India’s Tata blocked by the European Commission last year, the companies are also revisiting a possible merger, which could face fewer objections from Brussels due to changes in the make-up of the EU steel market.

Attempts to team up with local steel rival Salzgitter, whose largest shareholder is the state of Lower Saxony, have thus far been rebuffed.