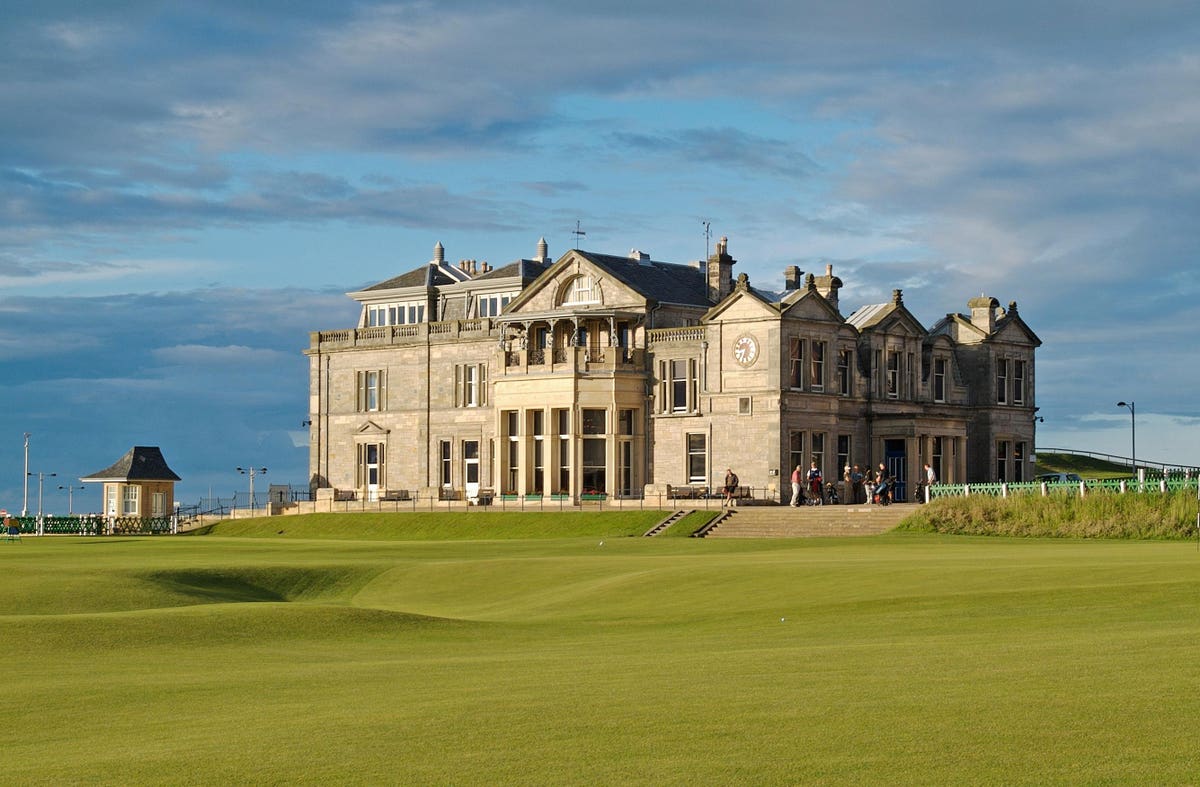 By spanning the globe to bring you the most legendary private members clubs, the world’s exclusive golf courses and clubs have been announced for 2022-2023 by Platinum Clubs® of the World. Offering legendary, historic, and challenging courses where even the most famous names are often turned away, this year’s winners represent the standard of Excellence for the finest Private Golf & Country Clubs.

According to Dennis Burns, Executive Director of Club Leaders Forum & Platinum Clubs®, “Private golf clubs were one of the few industries that benefited from the pandemic. Since most of the nation has looked at covid in the rear-view mirror, rounds of golf and club usage have both seen significant increases, which has continued through 2022. Generally, club memberships are in more demand, and initiation fees and monthly dues have increased. The trend to work from home has also contributed to members utilizing their club more frequently with more free time to play golf and socialize.”

I spoke with Rathan Kumar, Founder, and CEO of MobiCom, curating the largest network of private clubs and their members through PlatinumClubNet and PrivateClubWorld. He explains how the demand to access private clubs worldwide by members on their network has surged as they travel seeking experiences that complement their lifestyle has increased, emerging out of the pandemic.

“Requesting access to private member clubs when they travel has become a huge ask, as members find them safe and secure and the process seamless without having to route such requests through their home club. Even more exciting for them is the ability to request access to city clubs, as they cater to elevated dining and networking experiences and offer accommodation.”

“With over 100 private clubs across 17 countries on PlatinumClubNet, we are now primed to onboard another 200 city clubs in 118 cities across 36 countries, growing our global private club citizenship network.” he adds. “We are equally excited to be able to offer this benefit to the members of these most exclusive golf and country clubs in the world.”

Founded in 1932, the club is known for being an exclusively male club, but it finally opened its doors to several female members in 2012 and hosted the first amateur tournament for women in 2019. The club is notoriously perfectionist about its appearance: reports show that pine needles are imported, bird sounds are played on hidden speakers, and bunkers are filled with quartz pine sand. Augusta National is famed as the home to the Master’s tournament and was designed by champion golfer Bobby Jones and Dr. Alister MacKenzie. Nearly impossible to become a member, but if you are so lucky, the initiation fee is upwards of $500,000.

2. The Royal and Ancient Golf Club of St Andrews (Scotland)

The Royal and Ancient Golf Club of St Andrews is the world’s oldest and most prestigious golf club. Based in Scotland, it is regarded as the worldwide “Home of Golf,” founded in 1754. The Royal and Ancient Golf Club (but not The R&A) had a male-only membership policy until 2015, when it welcomed its first honorary female members, including Princess Anne and several pro golfers.

Shinnecock has hosted the US Open multiple times. You can only play at Southampton, New York’s Shinnecock Hills if a member accompanies you. It was the first American golf club to admit women members. A nine-hole ladies-only course was designed and built in 1893, becoming America’s first ladies’ golf course. (Ranked #4 course in the world by GOLF)

The course was designed in the 19th century for the Duc de Guiche and retains much of its original design. Several years after the duke died in 1962, the club became the property of its small group of members and remains the most exclusive club in continental Europe. (Ranked #5 course in the world by Golf Digest)

Royal Melbourne Golf Club is a 36-hole golf club in Australia located southeast of Melbourne. Its West course is ranked number 1 in Australia. Founded in 1891, it is Australia’s oldest golf club. (Ranked #4 best course in the world by Golf Digest and #7 by GOLF)

Pine Valley Golf Club was founded in 1913 and is a highly exclusive club. Membership is by invitation only from the board of directors. Guests are allowed into the club only if they are invited and accompanied by a member and must have low handicaps. The club voted in 2021 to remove all gender-restricted language from its bylaws. Before this, women were only permitted to play the course on Sunday afternoons. It still needs to be made clear how many women are actual members. (Ranked #1 course in the world by GOLF)

The Baltusrol Golf Club is a private 36-hole golf club in Springfield, New Jersey. The club was purchased in the 1890s by Louis Keller, the publisher of the New York Social Register. Until the end of the 20th century, African-Americans and Jews were not allowed to be members. In 1985, Baltusrol became the first club to have hosted the U.S. Open and Women’s U.S. Open on two different courses. Membership is by invitation only and costs $150,000 for the initiation fee plus $18,500 in annual dues.

The Merion Golf Club launched in 1896 when members of the Merion Cricket Club opened a golf course in Haverford Township. With Scottish-style bunkers and wicker basket pin toppers, Merion has hosted 18 USGA championships, more than any other golf venue in the country. Initial membership fees are upwards of $70,000, with $6,000 yearly dues. (Ranked #13 course in the world by GOLF)

Established as a private fishing club at the mouth of Dispatch Creek 75 years ago, this private club offers two championship 18-hole courses surrounded by mangroves and coconut palms. It has its own 4,000-foot airstrip, school, museum, security force, and fire department. To live in Ocean Reef, a resident must be sponsored by two current members and purchase a charter equity membership for $200,000. A superyacht marina with 175 slips and docks for yachts up to 175 feet is also offered in one of the most secure developments in America.

This is the famed Club where Members of Congress meet socially with business leaders. Opened in 1924, the Club has a long history of U.S. Presidents as members. It also has the largest clubhouse in the United States, with an indoor duck pin bowling alley, tennis club, ballroom, indoor pool, and a lap pool. There are an additional 21 overnight guest accommodations for members. With a ten-year waiting list, initiation fees are $120,000, and additional yearly fees are $50,000.

Overlooking the South China Sea, a one-hour flight from Hong Kong, the exclusive club has less than 50 members at an initiation fee rumored to be as high as $1 million! Surrounded by sea on three sides, the club’s 18-hole golf course features spectacular rolling hills and dramatic scenery.

Muirfield is a privately owned club and home to The Honourable Company of Edinburgh Golfers. Located in Gullane, East Lothian, Scotland, Muirfield is one of the golf courses used in rotation for The Open Championship. The club is the oldest organized golf club in the world, starting in 1744. In March 2017, the club voted to admit women as members for the first time in its history. In August 2022, Muirfield hosted the Women’s British Open for the first time. (Ranked #7 best course in the world by Golf Digest and #11 by GOLF)

Sunningdale Golf Club is located in Berkshire, England, 30 miles west-southwest of London. The Club was founded in 1900 and has two eighteen-hole golf courses. Dogs are also welcome to accompany their owners on the course. Prospective members need support from six existing members and must play a round of golf with a committee member before their names are proposed for membership. (Ranked #15 best course in the world by Golf Digest)

Boca West is one of the largest private equity-owned clubs in America, with 1,400 acres of lush tropical landscaping and magnificent private residences. The Club’s 55 neighborhoods are bordered by four championship 18-hole golf courses and seven dining venues. The initiation fee is $70,000, and annual dues are $12,000.

With only 250 members, many of whom are prominent political figures, this is one of the world’s most desired clubs. The stunning location in Pebble Beach opened in 1928 with dramatic cliffside holes overlooking the ocean. Rumored fees of over $250,000 are determined by yearly running costs, which are divided between members regardless of how often you use the club. Controversial with its membership past, it is still unclear how many black members other than Condeleeza Rice are inducted. (Ranked #2 best course in the world by GOLF)

*Also awarded Best in the World

Denial of responsibility! Pedfire is an automatic aggregator of the all world’s media. In each content, the hyperlink to the primary source is specified. All trademarks belong to their rightful owners, all materials to their authors. If you are the owner of the content and do not want us to publish your materials, please contact us by email – [email protected]. The content will be deleted within 24 hours.
Augusta NationalBaltusrol Golf ClubPine Valley Golf ClubPlatinum ClubsShinnecock Hills Golf ClubThe Royal Melbourne Golf ClubTop 30 Most Exclusive Golf And Country Clubs In The World Honored With Platinum Status
0
Share