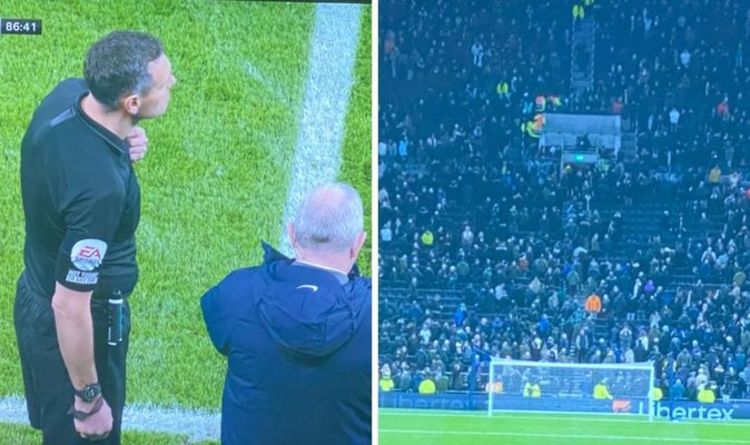 Fans inside the Tottenham Hotspur Stadium roared to alert referee Andre Marriner to a medical emergency in the stands in the closing stages of tonight’s Carabao Cup semi-final second-leg between Spurs and Chelsea. With just a few minutes left on the clock, there was an eery atmosphere inside the ground as supporters began to notice an incident unfolding in the stands.

Unfortunately, the uncomfortable and concerning scenes have become somewhat of a common occurrence this season, particularly in the Premier League.

Back in October, Tottenham’s win at strugglers Newcastle was paused in the second half when a fan required immediate medical attention.

Marriner was also the man in the middle that day and was alerted to the incident by Spurs full-back Sergio Reguilon.

The players were taken off the field that afternoon and there was an extended break in play before the match recommenced.

Tottenham huffed and puffed but were unable to even register a goal across the two legs.

Their struggles have once again highlighted the need for investment in the January transfer window.

Pierre-Emile Hojbjerg thought he’d won a penalty in the first-half when he was brought down by Rudiger.

However, VAR ruled that the contact actually came outside of the box, overturning the penalty.

Harry Kane thought he’d pulled a goal back but the England captain was ruled offside following another VAR check.

Spurs were somewhat fortuitously handed a spot-kick in the second half when Lucas Moura went down under the challenge of Chelsea goalkeeper Kepa Arrizabalaga.

But correctly, VAR once again corrected the decision and overuled Marriner’s decision to award the penalty.

“Euphoria” Cast Then Vs. Now Photos

Antisemitism Is Rising On University Campuses, From Students…

Why 2022 Could Be Formula One’s Most Unpredictable Season…

Scotland set to return to the office as Nicola Sturgeon…

SAT Is Making Significant Changes, Here’s What You Need To…