Tourists Stop Jeep To Get Closer Look At Tiger. This Happens Next 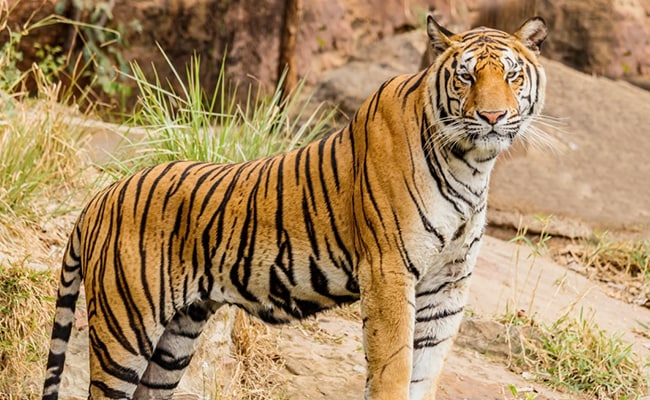 The location where this video was shot is also yet to be known.

It is not every day that you spot wild animals on a jungle safari. Sightings of tigers are even rarer with tourists often returning disappointed after a long day of quest. But one group recently got lucky to the point it became dangerous.

In a video tweeted by Indian Forest Service (IFS) officer Surender Mehra, a group of people aboard an open safari were greeted by a wild angry tiger. The big cat, in its natural habitat, seemed to be offended at the intrusion and can be seen growling and charging at them to mark its presence.

“Sometimes, our ‘too much’ eagerness for ‘Tiger sighting’ is nothing but intrusion in their Life,” Mr Mehra wrote in the caption of the post.

Watch the video below:

Sometimes, our ‘too much’ eagerness for ‘Tiger sighting’ is nothing but intrusion in their Life…????#Wilderness#Wildlife#nature#RespectWildlife#KnowWildlife#ResponsibleTourism
Video: WA@susantananda3@ntca_indiapic.twitter.com/B8Gjv8UmgF

The spine-chilling incident took place when a group of tourists aboard an open jeet spotted a tiger hiding behind bushes. While they were busy clicking its picture and trying to capture its movement up close, the wild angry cat turned towards them and charged at the safari with a loud roar. At this point, the jeep driver hurriedly moved the vehicle forward, while the tiger, without hurting anyone, turned around and retreated back to the jungle.

Mr Mehra shared the video on Sunday morning and since then it has accumulated several likes and comments. The terrifying clip has sent chills down the spine of netizens.

One user wrote, “Be Careful in Safari. Your Loud Voice Sounds made Tiger to Run back.” Another said, “It’s important to install certain behavioural guidelines even for tourists.”

Some users even blamed the incident on the “constant jabbering” by tourists. “Why can’t people maintain silence during the safari? Their noises make wild animals uncomfortable.. these sorts of people should be banned from entering the forest,” commented one user.

“True, forest dept should regulate the number of tourists visiting the core area with clear instructions to guides to stop recklessly following the tiger … there are other wild animals to watch,” wrote another.

It is not clear when the incident took place. The location where this video was shot is also yet to be known.

Caught On CCTV: How Woman Stole Necklace Worth Lakhs In Busy UP Store