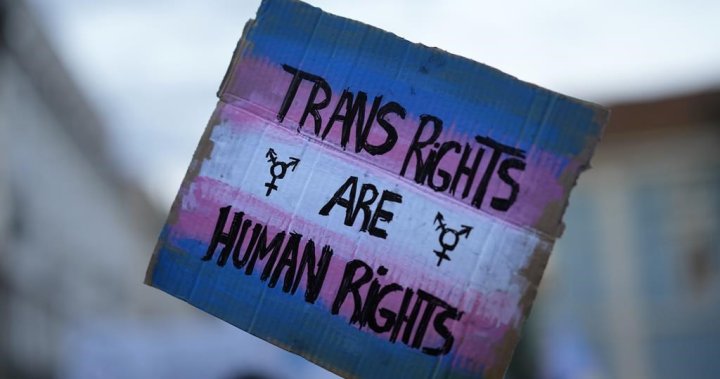 Each year as November rolls around, men across Canada begin to grow out a moustache to help raise funds for men’s health.

But for the transgender community, accessing the health-care system can be difficult.

‘Treat me with dignity’: Advocates call on allies for support on Trans Remembrance Day

“It has been quite the struggle just trying to live and exist,” Jack Saddleback, a 32-year-old Cree two-spirit transgender gay man told Global News from Saskatchewan.

“We have an astronomical gap when it comes to trans health care,” he said.

As an activist, speaker and program director of JusticeTrans – supporting members of the community with access to legal information – Saddleback would like to see a more intersectional and equitable health-care system for transgender individuals in Canada.


In Canada, there are at least 100,815 transgender and non-binary individuals, according to 2021 Statistics Canada census data released in April.

With a health system based on a “gender cis-normative binary,” education is important for making things more accessible to the transgender community, according to Saddleback.

“Education is going to be key to creating this accessible, intersectional space that is filled with that loving mentality that each person deserves the highest quality of care,” he said.

With access differing depending on where you live in the country, Saddleback would also like to see regions across the country band together to implement more universal care across the nation.

“I want individuals to know when they’re in Vancouver and they fly all the way to Halifax or all the way up to Nunavut, that they’re going to get the exact same care at every step of the way,” he said. “There is no more time to wait.”

But even as advocates fight for better access, even at the governmental level, there are still challenges.

“Public health care in Canada has never worked for them. It has never, ever met them at their needs,” they told Global News.

That’s why Wong-Tam has tabled a bill in their province called the Gender Affirming Health Care Advisory Committee Act in an effort to help eliminate barriers and improve accessibility for transgender Ontarians.

The government previously saw the bill tabled by Wong-Tam’s predecessor, Suze Morrison, in 2021, but it wasn’t elevated past the second reading.

Before re-introducing the bill this year, Wong-Tam approached several conservative MPPs to ask for support to help the bill pass by unanimous consent. This would skip the debate process and allow for the bill to be enacted faster.

However, this support was not granted.

“Their allyship is performative and when it comes to providing the support to really save trans people’s lives, they will choose not to. That to me is really the most pathetic thing about why the government has been putting up resistance,” said Wong-Tam.

“I think that the Ontario government, led by Premier Doug Ford, needs to understand that gender-affirming health care in Canada is not new,” they added, pointing to access in other regions like British Columbia.


Speaking with community members about accessibility has also been “powerful” for Wong-Tam.

For Kristie Kennedy, a parent of a transgender child on the waitlist for gender-affirming procedures, this type of health care “makes every difference for a child who is trans.”

“As parents, all we want is for our children to be happy. We tell our children they can be anything, so let them be. Let them be who they are,” Kennedy said in a recent release from Wong-Tam.

According to a 2020 report from Trans Pulse that surveyed more than 2,873 transgender and non-binary people aged 14 or older in Canada, while 81 per cent said they had a primary health care provider, nearly half also said they had one or more unmet health-care needs.

The survey also showed that respondents experienced abuse related to their gender identity in the last five years as 68 per cent reported verbal harassment, 16 per cent endured physical assault and 26 per cent experienced sexual assault.

Also in 2020, 259 people in Canada from 2SLGBTQ+ communities were the target of police-reported hate crimes based on their sexual orientation, according to Minister of Women and Gender Equality and Youth Marci Ien.

The federal government has launched the first-ever action plan in Canada for members of the 2SLGBTQ+ community in August, intending to create a more equitable country.

Part of the plan aims to embed 2SLGBTQ+ issues into the work of the Canadian government.

“We all have a duty to fight the social stigma affecting this group. We strongly encourage everyone in Canada to support 2SLGBTQI+ communities, and especially trans people, in order to end the systemic discrimination that occurs based on sexual orientation, sex characteristics and gender identity and expression,” Ien said Nov. 20, the Transgender Day of Remembrance.