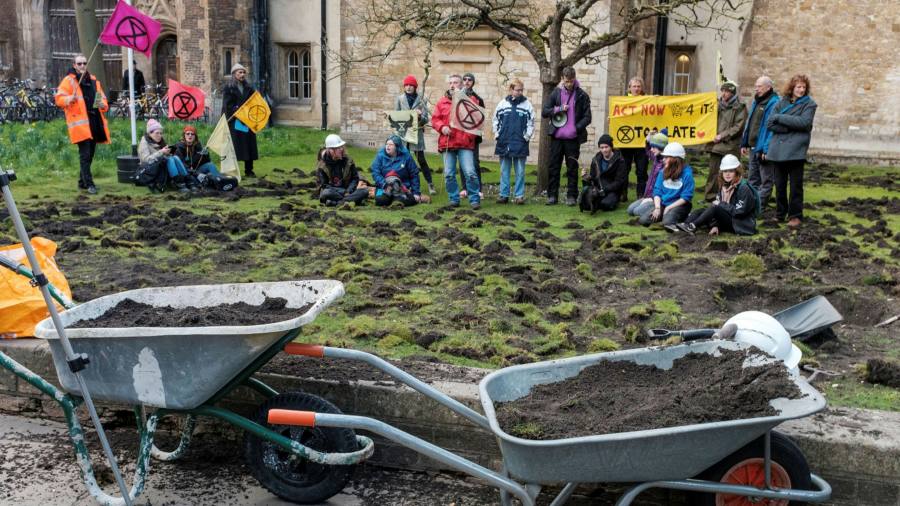 Trinity College Cambridge, the wealthiest Oxbridge institution, has pledged to sell all of the publicly traded fossil fuel companies owned by its £1.5bn endowment before the end of December following a four-year campaign by students concerned about climate change.

The alma mater of Sir Isaac Newton also promised to achieve net zero carbon emissions before 2050, as universities across the UK and US come under mounting pressure from students to radically reform their investments in response to global warming and social injustices.

“Trinity will take measures, beyond divestment, to reduce the carbon footprint of its portfolio and encourage biodiversity. Climate change is an issue that matters deeply to Trinity College,” said Richard Turnill, senior bursar who oversees the college’s finances.

The move comes just months after Cambridge’s main endowment fund, which oversees £3.5bn in assets, also said it would dump fossil fuels. Several individual colleges that make up the university have separate investment pots that are separate to the main endowment.

As part of the divestment process, Trinity will sell its holdings in 172 fossil fuel companies. Together they are worth around £15m, or 1 per cent of the endowment’s assets.

In addition, any fossil fuel companies held in Trinity’s illiquid private equity portfolio will be sold within five to 10 years.

Trinity also said it will target reductions in the carbon footprint of its property portfolio, which accounts for 60 per cent of the endowment’s assets.

“We intend to bring together expertise both within and beyond the College to play a greater role in further climate change action,” said Dame Sally Davies, master of Trinity.

There is still work for Trinity to do while the college maintains investments in arms companies, and banks with Barclays, the biggest funder of fossil fuel infrastructure in Europe

Cambridge Zero Carbon society, which campaigned for the university to dump oil and gas stocks, said Trinity’s divestment must be “only the first step” in the college’s rejection of destructive industries.

“There is still work for Trinity to do while the college maintains investments in arms companies, and banks with Barclays, the biggest funder of fossil fuel infrastructure in Europe,” said a spokesperson for the society.

Climate activists dug holes on the lawn in front of Trinity last February as part of a protest against the college’s “collusion in the destruction of nature.” One protester chained himself around Newton’s famous apple tree.

A group of more than 120 Trinity alumni published an open letter in January supporting divestment, with 41 per cent of the signatories indicating they would donate more if the college exited fossil fuels.

Cambridge university’s endowment fund pledged in October to divest from fossil fuels by 2030 following sustained criticism over links between the UK’s second-oldest university and polluting companies.

Pembroke College said last week that it would make “all reasonable efforts” to fully divest from fossil fuels by 2023. The college said the divestment was “not materially significant” because it had already sold its holdings in BP and Shell in 2019. But a campaign group backed by students and alumni said Pembroke still has “at least £20m” invested in funds exposed to fossil fuels.

A further three of the university’s 31 colleges — Christ’s, Queen’s and Clare Hall — have committed to ending both direct and indirect investment in fossil fuel companies. Another 12 colleges have committed to partial divestment.

Oxford university also said last year that it would sell out of fossil fuels across its £4.1bn fund but it did not set a deadline.

Half of the UK’s universities have already committed to at least partially divest from fossil fuel companies, according to People & Planet, a pressure group that has co-ordinated climate protests by students.