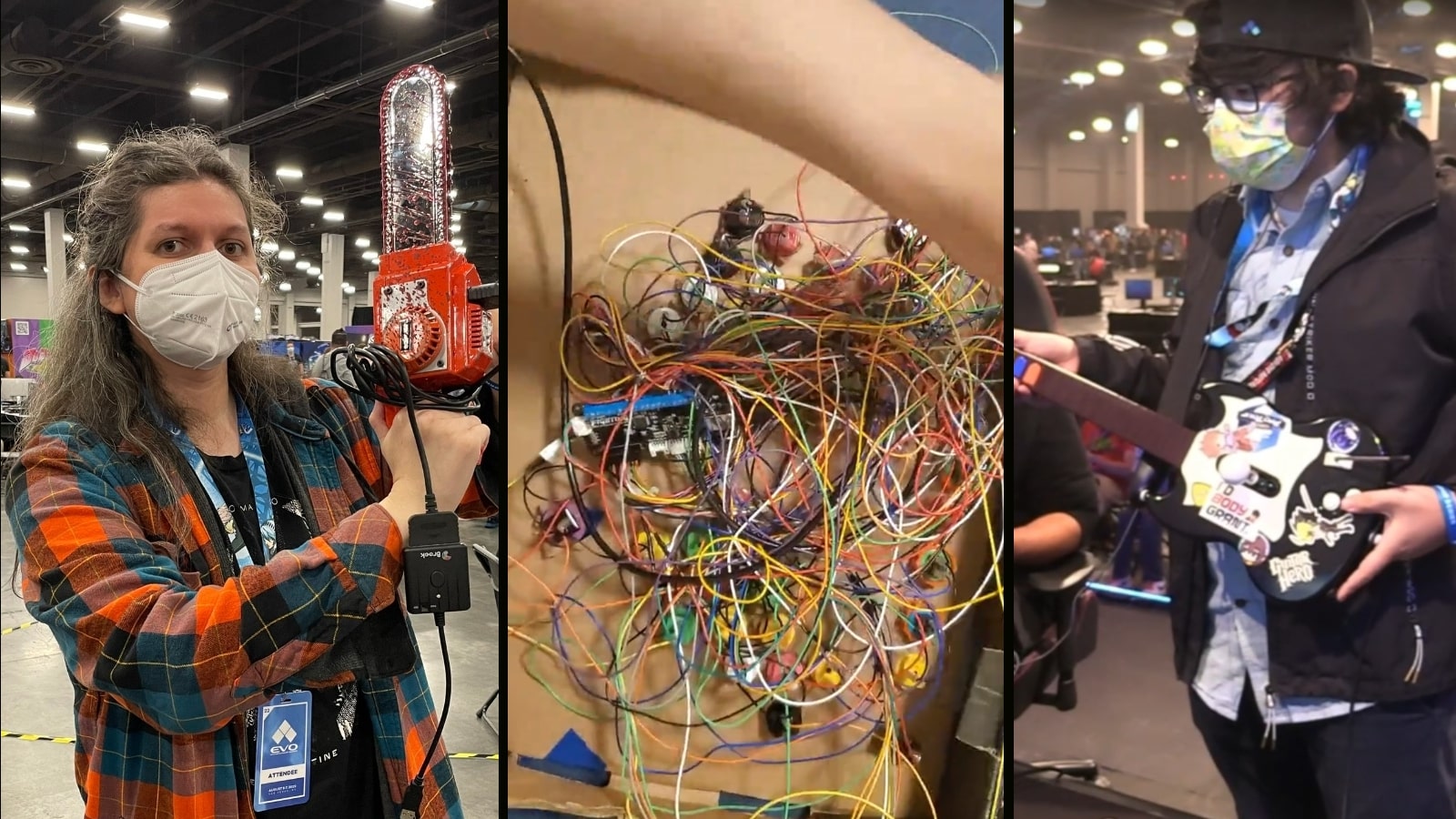 While most competitors at EVO 2022 are using either a controller or an arcade stick, there are a select few players that have some unorthodox controller setups.

There’s a long history of weird controllers in the FGC. Some players are in pursuit of creating their perfect controller, while others are there to have fun with strange, gimmicky controllers from the past.

EVO 2022 is no different. Here are a few of the weirdest controllers spotted at this year’s competition.

The first strange controller on the list is a modified Guitar Hero controller. Modified how, you may ask?

The buttons on the bridge of the guitar are untouched, but the button used to strum on the controller has been replaced with an arcade joystick.

As soon as twitter user yohseph was spotted in the Melty Blood pools at EVO 2022, viewers around the world took to social media any time this bizarre controller was shown on stream.

As more and more people spotted yohseph, we got a closer look at what exactly this Guitar Hero controller looked like. While it doesn’t look like the most practical controller ever, it certainly is eye-catching.

yohseph won a few games in the Melty Blood category, but was unfortunately able to break out of the pool for day 1 of EVO. However, this competitor has entered to compete in a wide range of fighting games over the course of EVO 2022, so keep an eye out for them in your favorite fighting game.

Gimmicky and impractical controllers have been a thing for decades, as one EVO 2022 competitor showed by bringing in an almost 20 year-old Resident Evil 4 Playstation 2 controller.

The controller is a very limited collector’s item bundled with a special edition of Resident Evil 4 on the PS2. There’s also a Gamecube version of the controller with a yellow chassis instead of the PS2 controller’s red one.

The price for this collector’s item ranges from around $500 USD for an unboxed version to upwards of $1000 USD that comes with the original packaging.

The competitor, twitter user Ecydis, competed in Street Fighter V with the controller and unfortunately got knocked out in the first round of matches. At least they went out in style.

A Shoebox With Almost 50 Buttons

For those unfamiliar, Hitbox controllers get rid of the standard joystick with face buttons design in favor of having only face buttons. Twitter user Anklegator1’s custom made controller takes that design philosophy to the extreme.

This controller has been custom-made by Anklegator in order to play Potemkin, their main character in Guilty Gear: Strive.

Rather than rebinding individual buttons, Anklegator has chosen to arrange the buttons on their controller in a way that allows them to execute combos.

The different colored buttons on the controller are color-coded to an individual command in-game for (relative) ease of use. Many buttons have been modified and added to this controller in Anklegator’s pursuit of finding an ideal controller setup that works for them.

In a brief twitter video, Anklegator showed what the process of adding a new button looks like, as well as the complex network of wiring that exists under the hood.

This EVO competitor has clearly put a great deal of time and effort into building their ideal controller, an effort that allowed them to make it past the first hurdle of competition and into the Top 384 pool for Guilty Gear: Strive.

U.K. Boy At The Centre Of Life Support Battle Dies