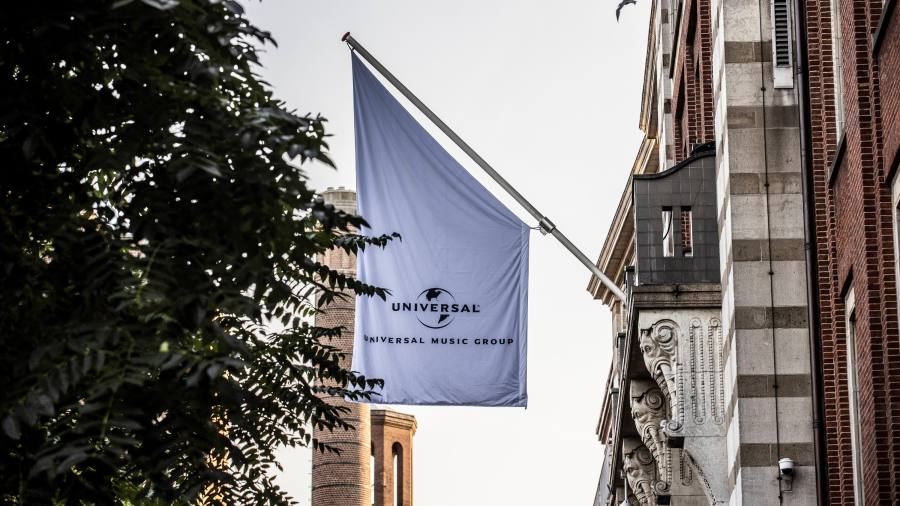 Sign up to myFT Daily Digest to be the first to know about Universal Music Group news.

Shares in the Universal Music Group leapt as much as 40 per cent in their debut on the Euronext in Amsterdam, valuing the world’s biggest music label at about €45.4bn in morning trading on Tuesday.

The listing is a major event for French media group Vivendi, which decided to distribute shares in Universal, its biggest business, to its own shareholders to cash in on the renaissance of the music business triggered by the rise of streaming services.

It is also a big win for Vivendi’s billionaire controlling shareholder Vincent Bolloré, whose company still owns about 18 per cent of Universal after the listing, and Universal’s chief executive Lucian Grainge, who is in line for a big payout.

Vivendi’s shares were initially suspended in Paris before opening down 17 per cent. Bolloré Group’s shares, through which the billionaire owns his remaining stake in Universal, were up 3 per cent.

Each Vivendi shareholder got one share of Universal before the listing, so 60 per cent of the company is now in their hands, and 10 per cent with Vivendi itself. US hedge fund investor Bill Ackman and a consortium led by China’s Tencent separately bought 30 per cent of the group before the spin-off.

The valuation falls somewhat short of the most optimistic estimates that Wall Street had issued before the listing — for example, JPMorgan had pegged the value €54bn.

But the music industry has staged a dramatic comeback in the past five years since streaming services began funnelling billions of dollars to its biggest companies — Universal Music, Sony Music and Warner Music — who hold the copyrights to most of the world’s songs.

Universal is betting that more reliable subscription revenue from streaming customers will continue to fuel royalty revenue and profit growth in the coming years, while emerging markets and new categories will also grow the music pie.

Carving out Universal has left Vivendi a much smaller and less profitable company whose remaining businesses are pay-TV provider Canal Plus, advertising agency Havas and book publisher Editis. Last year Universal brought in half of the group’s €16bn revenue, and more than three-quarters of its €1.6bn in operating profit.

But the stake sales to Ackman’s fund Pershing and Tencent have already brought Vivendi a cash pile of roughly €8bn, according to Kepler analysts, which it is expected to deploy on acquisitions to chart a new course.

Vivendi has already signalled its first big move to rebuild: last week it announced that it would boost its stake in French publishing and retail group Lagardère, paving the way for a full takeover offer later if regulators approve.

Vivendi is eager to get its hands on Lagardère’s largest business, the world’s third-biggest book publisher Hachette. It will give it critical mass that it lacks with Editis, even though antitrust regulators are likely to demand some divestments.

Our IPO will provide bountiful rewards to employees: MobiKwik