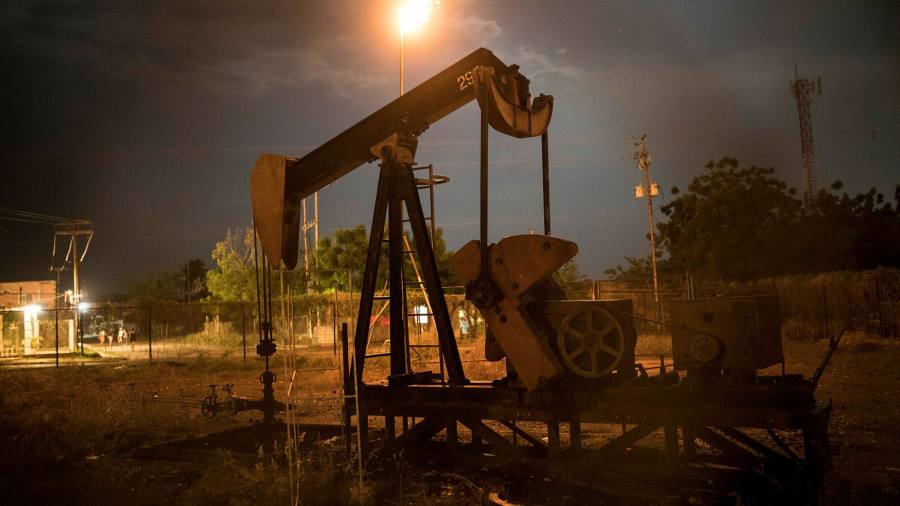 Once a wealthy oil exporter, Venezuela’s hopes of reviving its shattered economy are pinned on huge investment in extracting one of the world’s most carbon-heavy blends of crude.

But concerns about climate change are upending energy markets worldwide, and some experts believe much of the country’s most valuable asset will remain stranded in the ground.

“Oil will not save us this time around,” said Pedro Burelli, a former board member of Venezuela’s state-owned oil company PDVSA who now runs a consultancy in the US. “We have to reinvent ourselves as a country and as an economy.”

Under President Nicolás Maduro’s revolutionary socialist government, Venezuela has suffered one of the world’s worst-ever peacetime economic collapses. Gross domestic product has plunged more than three-quarters over the past five years, according to IMF figures. About 5m refugees have fled the destitute country.

Chronic mismanagement of the national oil industry and draconian US sanctions on exports have slashed Venezuela’s crude production to 359,000 barrels per day in the third quarter of this year, just over a tenth of the level achieved in the early 2000s.

But Venezuela has the world’s biggest proven oil reserves, according to Opec data. One of the very few things Mr Maduro and the country’s US- and EU-backed opposition leader Juan Guaidó agree on is that the road to recovery lies in huge investment to revive the industry.

The “Plan País” blueprint drawn up by Mr Guaidó’s team is unequivocal: “Oil and gas are the fundamental resources which the nation has to begin its reconstruction.”

Elías Matta, president of the energy commission of the Guaidó-dominated Venezuelan National Assembly, said that to rebuild the once widely admired PDVSA “will take eight to 10 years and cost $180bn to $200bn to produce 2m barrels per day more”.

Mr Matta told the Financial Times he was working on a new hydrocarbons law to reopen the sector to private investment and claimed there was “a high level of interest” from foreign oil companies in taking part.

But Mr Matta was speaking from Miami. Like many other Guaidó backers, he has been forced abroad by the Maduro government. The Venezuelan opposition faces almost certain defeat in elections next month for a new National Assembly under rules so skewed towards the government that the US has already called the ballot a “fraud”.

Yet, even if Mr Maduro and his inner circle could somehow be induced to depart, much of the country’s oil wealth may end up worthless because of the dramatic shifts in the global energy industry.

If you have the slightest concern about the future of oil demand, you wouldn’t touch [Venezuela] with a barge pole

“Plan País says ‘Let’s go back to the oil era again’. It’s the wrong premise. We are now at the end of the oil era,” Mr Burelli said in a talk to the British-Venezuelan Society, pointing out that Venezuela’s oil infrastructure has been effectively destroyed and PDVSA is in ruins.

“The country is physically in the hands of armed thugs of every colour and nationality,” he said. “You need a tremendous amount of security assistance even for the first phase of a humanitarian operation.”

Not everyone is so negative. One US oil industry executive said Venezuela was “still very feasible” as a destination for investment if the government were to change.

With every year that passes, investor pressure on oil companies to become carbon-neutral increases and Venezuela’s chances of reviving its once-mighty oil industry diminish. Its abundant Orinoco Belt crude, while relatively cheap to extract, is among the world’s most carbon-intensive.

“More and more companies are turning away from the dirty barrels and Venezuelan crude is among the dirtiest,” said Valérie Marcel, an energy expert at Chatham House in London. “There are still some players out there that might invest but they are becoming fewer and fewer.”

BP and Shell declined to comment. However, oil executives have said they are increasingly factoring in the carbon intensity of investments into future decision-making. Venezuela’s oil is likely to be less attractive in such scenarios, though it may still have some offshore gas potential.

Andrew Grant, who leads energy research at Carbon Tracker, an independent climate change think-tank, said its modelling showed that Venezuela would only find it economic to extract 2.5bn barrels from its vast oil reserves, or about five years production at a rate of 1.5m bpd.

“If you have the slightest concern about the future of oil demand, you wouldn’t touch [Venezuela] with a barge pole,” he said.

Some insist that Venezuela’s oil has not yet lost its allure. Ricardo Hausmann, a former Venezuelan planning minister in the 1990s now at Harvard University’s Centre for International Development, said “there are fairly few places in the world where there are proven reserves with zero geological risk and fairly low costs of production”.

Provided Venezuela could recreate an effectively functioning state, guarantee peace and security and offer an investment-friendly tax and regulatory formula, Mr Hausmann believed the country still had a chance of attracting oil companies.

But he conceded that oil “will never be as important a driver of the economy again as it was”, and urged Venezuela to think about investing in agriculture, tourism and other industries to compensate.

Francisco Monaldi, an expert on Venezuelan oil at Rice University’s Baker Institute for Public Policy, said the number of international companies that would contemplate investment in Venezuela was shrinking by the year.

“You can already see there are companies leaving Canada because of climate change. None of them will even consider Venezuela . . . there’s no doubt that there is a finite window for investment.”

B S Yediyurappa says will not allow Karnataka bandh against Maratha body, warns of action