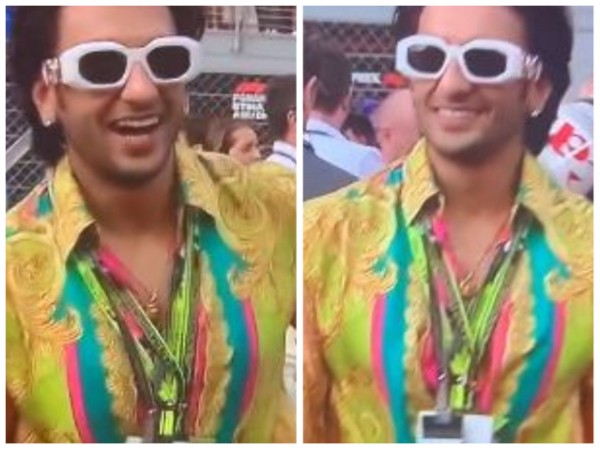 A video showing actor Ranveer Singh at the last Formula 1 race this year has the netizens talking!

In a video shared by Twitter user Jeetu Patel, a brief conversation between former Formula One driver and journalist Martin Brundle and Ranveer Singh has gone viral.

Replaying that question Ranveer humbly introduced himself and said, “I’m a Bollywood actor, sir. I hail from Mumbai, India. I am an entertainer.” Ranveer’s response is winning hearts on the internet!

Brundle then complimented Ranveer’s outfit and said “That respect for that suit. Because that is punching.” In his reply, the Indian actor said, “You know the best part sir, I have to send it all back in the morning.”

Ranveer’s humility and demeanour are winning hearts on the internet! Check out the video:

@RanveerOfficial you have killed it on the grid walk at the Abu Dhabi F1 #f1 #RanveerSingh #DeepikaPadukone #SkyF1 #martinbrundel #Bollywood #AbuDhabiGP pic.twitter.com/erOjPaptoU

Talking about the F1 race, Max Verstappen extended his record by taking his 15th win of the season in Abu Dhabi, and the Red Bull driver said his team couldn’t have done much better in 2022.

The two-time champion dominated to win over Charles Leclerc in the season finale, where he qualified for pole position and led all but one lap on Sunday. Verstappen was elated by his and the team’s performance.

While Sebastian Vettel finished 10th in the Abu Dhabi Grand Prix to round out his illustrious Formula One career and bid farewell to the F1 racing track.

Numerous events were held to commemorate Vettel’s final race, including a track run on Saturday night that the four-time world champion organised for spectators of all skill levels.

Talking about Ranveer, on the work front, he will be next seen in director Rohit Shetty’s upcoming comedy film ‘Cirkus’ alongside Jacqueline Fernandez and Pooja Hegde. The film is all set to hit the theatres on the occasion of Christmas 2022.

From ‘Cheers’ to ‘It Takes Two’

Rahul Gandhi Blew Kisses While Passing By BJP Office. Then…