We shouldn’t need cameras to curb distracted driving, but we do 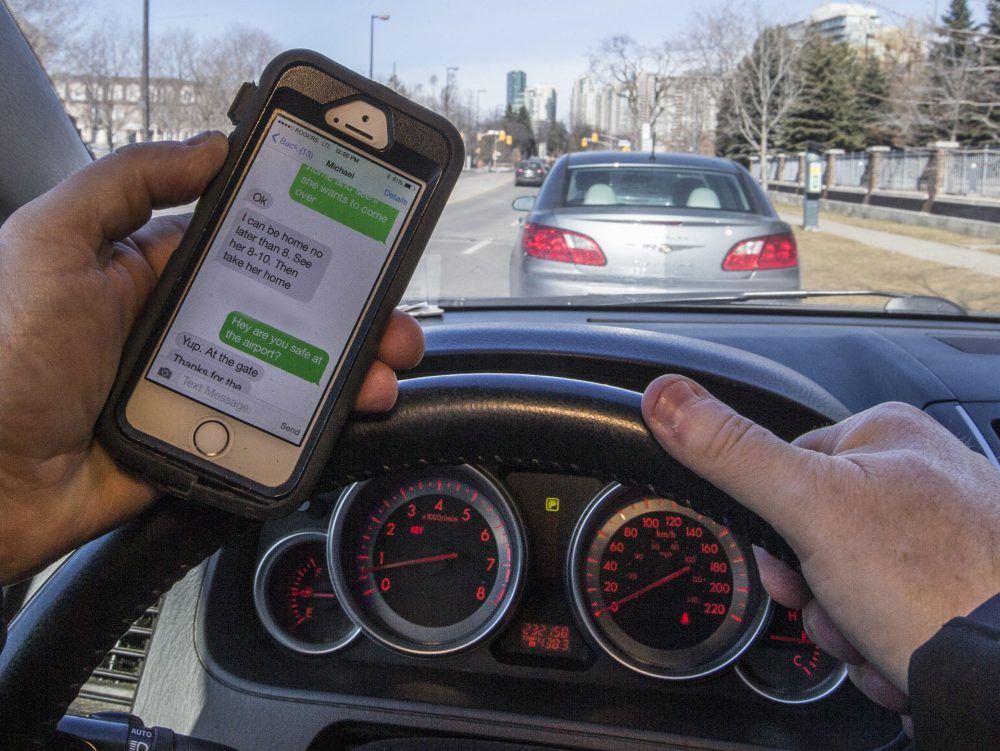 There is interesting — and potentially life-saving — technology being tested on several Edmonton roads in the coming weeks. It’s an innovation that we shouldn’t even need, but sorely do.

“The University of Alberta is testing a new system that’s similar to photo radar, but catches drivers on their phone,’ reports Global News. Instead of snapping a pic of your car as it blasts through a red light or registers a closely-held-secret-number-of-kilometres-over-the-speed-limit, this pilot project is instead hunting for the increasing cause of most crashes in Canada: distracted drivers.

A CAA survey from April of this year reports what most of us already know: Canadians are addicted to their distractions. “Nearly 8 in 10 Canadian drivers (79%) admit to being distracted while driving…[a]nd among the most dangerous distractions people name are their own in-vehicle technologies, like a phone, the vehicle console, or voice-activated features.” The UA experiment features a large base unit sporting something resembling a light standard. It is equipped with sensors that are sensitive enough to see beyond windshields and capture hi-resolution pictures of driver behaviour. It also has something even better: “The artificial intelligence is trained to detect phone use from large datasets allowing the system to pick up on multiple cues that may indicate distracted driving.”

You know when you toss your phone because you might have just spied a police car? I’m guessing that would count as a ‘cue’.

“The AI system is trained to recognize and flag distracted driving events based on millions of data points…while it is fairly accurate, the system also reports false positives,” says Tony Parrino, General Manager for Acusensus, the American company which developed the technology. For this reason, the project, being run by the University of Alberta’s Urban Traffic Safety
Research Division, will have human eyes review every captured image. Nothing captured during this three-week test run will result in penalties for drivers.

Generally speaking, most people wear their seatbelts. We spend a lot of time researching the safety features of any car we consider buying. While impaired driving continues to be a brutal problem and speeding will never go away until drivers do, distracted driving has emerged at the forefront of ways that drivers are choosing to crash, die, and visit that on other road users.

Results from Traffic Injury Research Foundation (TIRF; download available here) from 2017 extrapolate impaired (verifiable by convictions) and distracted (more self-reported) numbers. While some of the information revealed is what we’ve come to expect (age 20-45, impaired still causes more deaths than distracted: 288 to 178), the growing problem of distracted drivers is revealed. This behaviour is most deadly for those under 16 and over 55 (17 to 11; 190 to 80), but it’s the pedestrian numbers that should be raising the biggest flag: 80 Canadian pedestrians were killed due to distracted driving in 2017, versus 10 killed by an impaired driver.

Transport Canada statistics are always behind, though augmented by other groups like CAA, TIRF, and IBC. All indicators show a stubborn, growing problem, and one that isn’t as simple as someone texting while they drive.

Texting, at least anecdotally, is the first thing most of us notice about the drivers around us — and even cop to ourselves. Meanwhile, “new technology in vehicles is causing us to become more distracted behind the wheel than ever before. Fifty-three percent of drivers believe if manufacturers put “infotainment” dashboards and hands-free technology in vehicles, they must be safe,” reports the National Safety Council, capturing most of the problem in a nutshell. Our cars are distracting us as much as our cell phones.

Of course, many vehicles themselves know if you’re not concentrating on driving. “BMW, Subaru and other automakers have installed cameras and sensors…that use facial recognition technology to identify signs of driver distraction or fatigue. Some can measure head and eye movements to make sure your eyes are up and on the road ahead.. Some [cruise control] systems will put the control back in your hands if you start to look down at your phone or don’t keep your hands on the wheel,” from this report. Whether it’s internal tech from manufacturers or external, like this pilot project from the University of Alberta, it’s no longer a question of the magnitude of driver distraction, but how we curb it.

Drivers should consider how the carrot quickly becomes the stick. You might see portable signs that flash your speed to you to let you know how fast you’re going, but if enough drivers don’t heed the warning through an area, speed cameras come to the table. When telematics was first introduced by insurance companies two decades ago, we were told it would only be used to reward good drivers, never to punish bad ones; that slippery slope is now being eroded in places like Ontario. “The Financial Services Regulatory Authority of Ontario (FSRA), the folks who oversee auto insurance in the province, have made changes that could effectively allow insurers to reward or penalize drivers enrolled in a UBI program. Until recently, only rewards (i.e. discounts) were permitted to encourage good driving habits; now, penalties (i.e. surcharges) are an option as well.”

Consider this University of Alberta pilot project the warning.

NYC program focuses on fixing up and selling “zombie homes,” potentially to low- and moderate-income families