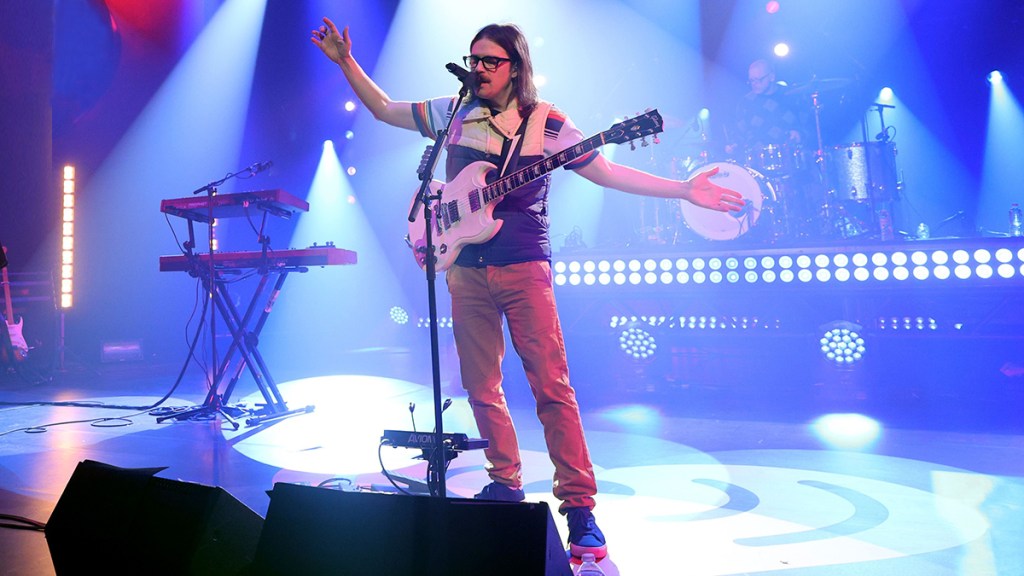 “Think of this less of as a show, and more like an open rehearsal,” Weezer frontman Rivers Cuomo told the packed house at the tiny, iconic club Troubadour in Los Angeles on Monday night (Sept. 19), where his much-beloved band played a semi-secret, deep-cut packed set under the name Goat Punishment — no phones allowed. “We’re gonna play a lot of stuff you may not expect to hear, and we’re not going to play a bunch of stuff you probably did expect to hear.”

Truth in advertising: over the course of 90 minutes, the band debuted an entire new album, “SZNZ: Winter,” due out Dec. 22, and blazed its way through fan-favorite deep cuts — including the B-side “You Gave Your Love To Me Softly” and the epic “The Greatest Man Who Ever Lived (Variations on a Shaker Hymn),” the latter of which had not been played since 2014.

The focus, however, was clearly on new songs. For the past year, Weezer has been offering up a new album along with each season. They were expected to play all four at a series of shows on Broadway this month, so it stands to reason that this show was a sort of make good.

The new album’s theme, Cuomo said, was “sadness,” though in that depression the songs maintained the band’s penchant for catchy melodies (especially the off kilter “I Want a Dog”) and guitar heroics (“The One That Got Away”). “Basketball” has an opening arpeggio that calls to mind the beloved “Pinkerton” track “El Scorcho,” and “Dark Enough To See The Stars” contained wistful counter-melodies from guitarist Brian Bell.

In addition to the “SZNZ: Winter” cuts, the band also debuted the hyper-dancey “What Happens After You,” the first single from the imminent “SZNZ: Fall” album, played twice this night in preparation for its performance on “Jimmy Kimmel Live” later this week.

Of course, a few hits — “Beverly Hills,” “Say It Ain’t So,” “Undone (The Sweater Song)” — were peppered in, as well as a couple of newer cuts (the silly “Records;” the Grammy-nominated “All My Favorite Songs”). But the highlight may have been one of the most unexpected moments: a cover of Wheatus’s early-aughts hit “Teenage Dirtbag,” a song mistaken so much for a Weezer track that the band actually used to cover it a decade ago. “It got big on TikTok,” Rivers said before launching into a massive singalong. “We’re not complaining.” Neither were the hardcore fans who filed out after having experienced a truly one-of-a-kind night.

“Want To Give Audiences An Even Bigger Dose Of Entertainment”