What is going on at Europe’s largest nuclear power plant 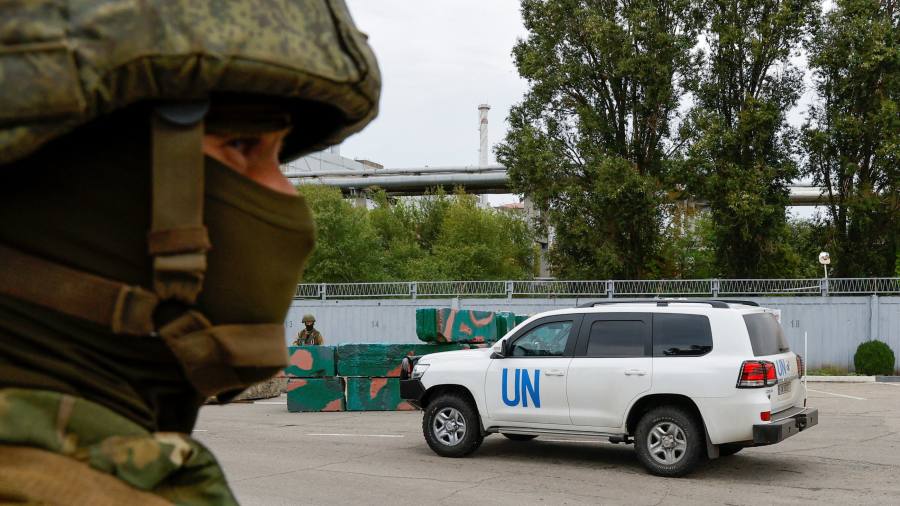 This article is an on-site version of our Europe Express newsletter. Sign up here to get the newsletter sent straight to your inbox every weekday and Saturday morning

The UN team of nuclear energy inspectors finally made it to the Zaporizhzhia power plant in Ukraine yesterday. But the situation at the Russian-occupied facility remains murky and highly dangerous. We’ll explore what Rosatom’s former chief may have to do with it.

Meanwhile, the European Commission has finally shown its hand on measures aimed at lowering energy prices, just hours after one of its officials warned that the crisis is likely to continue well into 2023.

And with the next UK prime minister set to take over next week, EU officials are warning Liz Truss that the bloc will refuse to engage in serious talks on reforms to post-Brexit Northern Ireland trading arrangements unless she takes the “loaded gun” of unilateral legislation off the table.

It has been said that Occam’s razor, the principle that simplest explanations are best, does not apply to modern Russia and nowhere has that been truer recently than in the stand-off over the Zaporizhzhia nuclear power plant in Ukraine, writes John Paul Rathbone in Kyiv.

It is a dangerous tangle that Russia has created. It is also one to which Sergei Kiriyenko might provide an interesting perspective. He is Vladimir Putin’s first deputy chief of staff and the Kremlin’s point man for all Russian-held territory in Ukraine, where the plant is located.

To recap the situation at Europe’s largest nuclear power station: in a nutshell, Russia is holding it hostage and has stationed troops there. Conditions have been worsening for weeks, fuelling fears of a Chernobyl-style disaster. An International Atomic Energy Agency mission yesterday managed to inspect the facility and said it would set up a permanent presence there.

The biggest fear is that the water-cooling system that stops the sole operating nuclear reactor from overheating will be destroyed or damaged in the conflict’s crossfire. (The reactor shell itself is designed to resist an aircraft flying into it).

A collapse of the cooling system is a possibility, given that the complex has been repeatedly shelled. If you believe Russia, Ukraine is responsible. If you believe Ukraine, Russia is to blame. Thanks to various back-up systems, there is no need to panic yet. But were the various pumping systems to break, the reactor would melt down.

Enter Kiriyenko. He is not directly involved in the situation, as he is ostensibly focused on the referendums about joining Russia being organised in the occupied territories.

“Russia will respect any decision they take, but since I often have to be in Donbas, Kherson and Zaporizhzhia, I know how people feel and see poll results. I understand that the decision at the forthcoming referendum will be unambiguous,” Kiriyenko said earlier this week.

But he is not just Moscow’s viceroy in Russian-occupied Ukraine. In his previous role, he headed Rosatom, the state nuclear energy corporation, and still maintains influence there, according to a person who has worked alongside him.

That gives Kiriyenko a unique understanding of the situation. Rosatom has blueprints of the plant because it was built in Soviet times. There are Rosatom technicians working there too, alongside the Ukrainian staff, to provide assistance “if required”, according to the company.

In short, Kiriyenko understands both Zaporizhzhia and nuclear power. He is close to Putin. He may well also know how far the nuclear plant’s role as hostage can be pushed before it gets truly dangerous, according to the person.

Just take a look at the craters created by the supposed Ukrainian shelling. Russia regularly submits photos of them to the IAEA and they show craters — strangely, oddly — exactly in between the buildings. Can shelling, even by Ukrainian gunners, ever be that precise?

Russian claims of Ukrainian shelling would not be Moscow’s first “false flag” operation. Nor, given how Moscow has turned off gas supplies to Europe, is it the first time Russia has used energy to hold its opponents hostage. The exact parameters of the IAEA inspectors remain undefined but hopefully they will be able to make an informed judgment soon.

How concerned are you about the shelling at Zaporizhzhia power plant? Tell us what you think and click here to take the poll.

Read Martin Arnold’s take on why the strength of the eurozone labour market and the subsequent risk that wages will rise sharply may lead to a faster interest rate rise by the European Central Bank next week.

Amid the scrambling to deal with this winter’s crisis, the commission also gave a salutary reminder to MEPs that the pressure does not end next spring, writes Alice Hancock in Brussels.

Mechthild Wörsdörfer, deputy director-general of the commission’s energy department, told legislators at the parliament’s industry committee hearing yesterday that while gas storage had reached an average of 80 per cent ahead of this winter, it would need to be back up to 40 per cent in March next year if the bloc was to be ready in time for the winter of 2023-24.

But she warned: “It is very difficult to predict the winter. It depends on weather and volumes of alternative gas supplies.”

Member states grappling with industries closing down and consumers nearing the poverty line because of eye-watering energy bills are more focused on the near-term issue, however. And, just hours after Wörsdörfer spoke, the commission proffered a potential plan.

A paper seen by the Financial Times recommends a three-point plan for cutting electricity bills:

The commission ruled out a series of options including an extension of the Iberian measure — a subsidy to fossil fuel producers in Spain and Portugal that allows them to offer cheaper electricity — on the basis that it would increase gas and electricity consumption within the bloc.

The document did not specify a time period for any emergency measures or the exact legal basis through which they could be implemented.

EU officials were keen to underline that it is all up for discussion when EU energy ministers gather in Brussels next Friday.

What to watch today

Join us at the FT Weekend Festival in London (or online) tomorrow. Hear from novelists including Robert Harris and Monica Ali, MP and former health secretary Jeremy Hunt, as well as Ukrainian chef Olia Hercules and psychotherapist Esther Perel. Enjoy some wine tasting, cocktail mixing, theatre, jazz, and much more. Europe Express subscribers get a £20 discount by using the promo code FTWFxNewsletters at ft.com/ftwf

Britain after Brexit — Keep up to date with the latest developments as the UK economy adjusts to life outside the EU. Sign up here

Trade Secrets — A must-read on the changing face of international trade and globalisation. Sign up here

Are you enjoying Europe Express? Sign up here to have it delivered straight to your inbox every workday at 7am CET and on Saturdays at noon CET. Do tell us what you think, we love to hear from you: [email protected]. Keep up with the latest European stories @FT Europe

‘Spinner Bowling A No Ball is A Crime’

Rizwan and Rauf star in thriller as Pakistan level T20I…