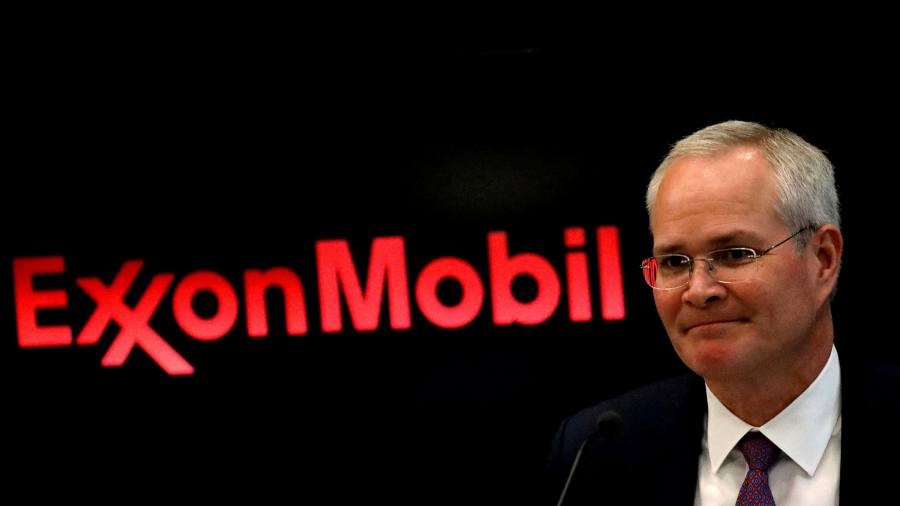 Our first item picks out the main bits from the strategy update. Our second discusses the investor battle Exxon is fighting. Our third looks ahead to the Opec meeting today.

Thanks for reading. Please get in touch at energy.source@ft.com. You can sign up for the newsletter here — Derek

Exxon’s chief executive Darren Woods struck a more humbled tone at yesterday’s strategy update after what has been one of the most difficult years in the supermajor’s history. Two things stood out:

1. Exxon’s energy transition strategy is coming into focus. There are no flashy 2050 net-zero emissions targets or big investments in offshore wind or other trendy clean tech businesses. But Woods is promising investors more low-carbon investment.

Exxon is focused on carbon capture and storage, hydrogen and carbon offset markets that shield its core oil and gas business from potential energy transition threats. Still, he said Exxon had not “shut the door” on any technologies.

2. Exxon’s oil supply growth ambitions have been tamed. The capital spending budget has been gutted and the company now says that its output will remain largely flat at around today’s 3.7m barrels of oil equivalent a day through 2025. Last year, a 5m boe/d target by 2025 was at the centre of Woods’s strategy.

The Permian Basin is crucial here. Exxon says it has cut its Permian capex outlook by 40 per cent from last year and now expects to produce around 700,000 boe/d from the US shale play by 2025 compared to last year’s target of more than 1m boe/d.

However, even that sharply reduced target has some shale rivals worried. It implies Exxon still plans to expand output at a clip of 15 per cent a year through 2025 at a time when most shale companies have pledged to keep their annual growth to around 5 per cent to avoid swamping the market with US supply.

The supermajors are now “the big swing factor on how fast the Permian will grow,” Pioneer Natural Resources’ CEO Scott Sheffield told CERAWeek on Tuesday.

If it is any comfort, Woods told ES yesterday there are no plans to accelerate drilling this year even if prices rise above $70 a barrel, as some are predicting. “That additional price and revenue that comes to the company will make its way into the balance sheet,” said Woods. (Justin Jacobs)

The elephant in the (virtual) room during yesterday’s Exxon strategy update was the proxy shareholder battle with Engine No 1, which seeks to add new board members, among other changes at the supermajor.

Exxon’s size and symbolic significance make this one of the most important events in global energy. Why?

It is enabling a real debate about the energy transition and how a supermajor should approach it. Take two comments as a starting point:

“The common theme in Exxon’s positions is that climate change is a 100-year problem,” said Andrew Logan, senior director of oil and gas at Ceres, a non-profit that coordinates investor action.

“The company with the greatest ability to move the needle on emissions in the next five years is Exxon,” said an executive at an asset manager with a position in the supermajor.

The battle is forcing Exxon, which believes it is unfairly maligned for its climate stance, to articulate its position. It will not do clean power generation, Woods reiterated in two interviews with me this week — not because it doubts the technology (Exxon is a huge buyer of wind and solar power) but because it doesn’t think it can add anything to the sector.

It will not adopt net-zero emissions targets either (even as other US producers shift in that direction), because Exxon does not think a practical way to reach net zero yet exists. Meanwhile, its emissions intensity targets are a more effective way of reducing greenhouse gas pollution in the oil industry, Exxon argues, because focusing on intensity does not allow the company just to sell polluting assets that go on emitting somewhere else.

Many ES readers — and lots of shareholders — will disagree with these positions. But the activist battle has created an opportunity for a genuine debate about them.

It will reveal the appetite of Wall Street for disruptive investor-led action in the name of climate change.

The market-shaping passive funds and other asset managers are all talking up their climate cred. BlackRock’s Larry Fink was explicit in his letter to CEOs this year about the action he expects. We will find out between now and May’s Exxon AGM what this means for their holdings in oil companies.

“It comes down to the big index managers,” said Aeisha Mastagni, a portfolio manager at California State Teachers’ Retirement System, which is backing Engine No 1’s campaign. “It’s going to say something about where BlackRock, State Street and Vanguard are on these issues.”

Exxon’s sheer size is daunting to activists. At a market capitalisation of $240bn, amassing a position that enabled an investor to shake the foundations on its own would be a colossal endeavour.

Still, many people familiar with both Engine No 1 and Exxon think it has a chance, for a few reasons.

“This is a moment when real change can be made at Exxon, it’s a unique opportunity that hasn’t arisen before,” said Edward Mason, who clashed with Exxon over shareholder resolutions in the past and is now a director at Generation Investment Management (which does not hold stock in the supermajor).

Even if Engine No 1’s campaign doesn’t succeed, investor pressure, alongside market forces, has brought change. Twelve months ago Exxon was plotting huge new spending to increase oil production by 25 per cent in the next five years. Now it is talking up cash preservation, debt repayment, slower growth and a low-carbon business. A dividend that was looking shaky now appears secure.

We’ll find out soon if that’s enough to satisfy the investor base. (Derek Brower)

Will Opec hold the line on cuts?

Opec ministers meet today to decide whether to ease off the deep cuts that have propped up oil prices. At stake is a possible 1.5m barrels a day rise (including 1m from Saudi Arabia).

Reuters said yesterday that the group might roll over its existing cuts — meaning deferring production increases again — because it is worried that demand remains weak. That helped lift oil prices on Wednesday, with Brent trading above $64 a barrel.

“Saudi Arabia is steering the Opec+ ship with an abundance of caution,” he said. “But the iceberg risk is more about over-tightening than Covid-related headwinds. A continued oil rally won’t speed the economic recovery.”

A record 2,156 megawatt-hours (MWh) of new energy storage systems were brought online in the US in the final quarter of 2020, according to a new report from Wood Mackenzie and the US Energy Storage Association. That was nearly triple the level of the previous quarter, which was itself a record.

Overall in 2020, 3,487 MWh of new storage came online — more than the combined total over the previous seven years.

“The data truly speaks for itself,” said Dan Finn-Foley, Wood Mackenzie’s head of energy storage. “This is the hallmark of a market beginning to accelerate exponentially, and momentum will only increase over the coming years.”

A sweeping climate bill introduced by House Democrats this week sets the ball rolling to convert some of Joe Biden’s ambitious environmental targets into law.

The Clean Future Act would require 100 per cent of American electricity to come from clean sources by 2035 — one of the president’s central climate campaign pledges. It would also set a target of a net-zero emissions economy by 2050 — another core Biden pledge — with an interim target of a 50 per cent cut in greenhouse gases from 2005 levels by 2030.

But the $565bn bill has a long road to travel before becoming law and is unlikely to be enacted as is. It needs to be passed by committees in both chambers and then the full House and Senate.

Frank Pallone, chair of the House Energy and Commerce Committee, who introduced the bill, said he was open to working with Republicans — who have already voiced opposition — on its contents.