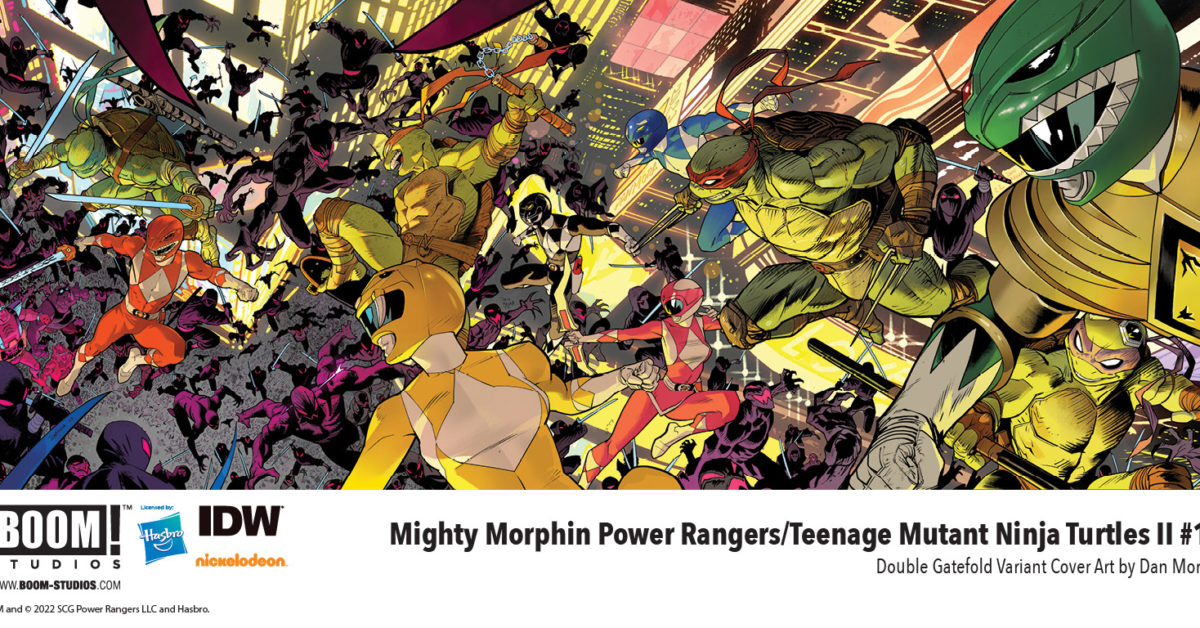 So it’s no surprise that publisher Boom Studios is back with Mighty Morphin Power Rangers/Teenage Mutant Ninja Turtles II, but with the ultra-popular World’s Finest and Once & Future artist Dan Mora stepping in on art duties, and going even bigger for the sequel – especially when it comes to the covers on the first issue.

That includes homages inspired by the decades that both properties debuted, like the iconic 1980s Teenage Mutant Ninja Turtles #1-inspired cover by Bon Bernardo featuring the Rangers. Or the four main covers and fifth double gatefold cover by Mora that clearly take their inspiration from Chris Claremont & Jim Lee‘s X-Men #1.

Speaking of 90s nostalgia, artist Freddie Williams II‘s deluxe edition variant includes an exclusive print and a 1-in-10 trading card reminiscent of X-Force #1, a strategy that worked quite well for Boom with Mighty Morphin Power Rangers #100. Williams is also teaming up with TMNT co-creator Kevin Eastman for a cover and not just on the first issue… but every issue of the series. 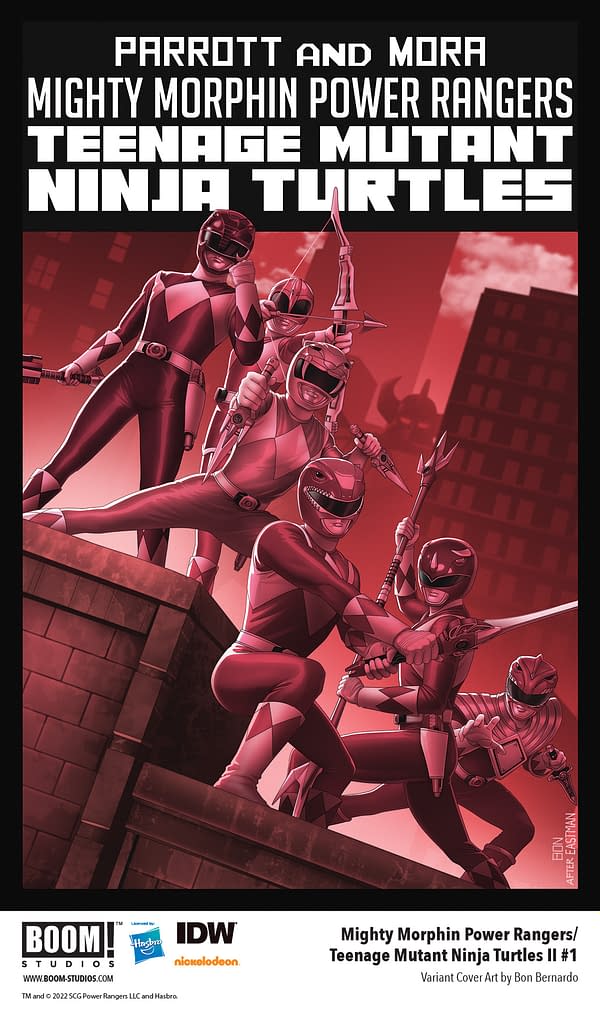 And that’s in addition to variants by some of the industry’s hottest cover artists including Jenny Frison, Taurin Clarke, Francesco Francavilla, Björn Barends, InHyuk Lee, Goñi Montes, and Mike del Mundo. As we said, Boom is certainly going bigger with this crossover with IDW. And from what I’m hearing, it is paying off with initial orders already ahead of where the previous crossover was after Final Order Cutoff.

MMPR TMNT II #1 (OF 5) CVR E DOUBLE GATEFOLD VAR MORA
BOOM! STUDIOS
OCT220273
(W) Ryan Parrott (A/CA) Dan Mora
It’s been six months since the Teenagers With Attitude and the Heroes In A Half Shell teamed up to defeat the unholy alliance of Rita Repulsa and Shredder, but a new threat will force them to reunite in the crossover YOU demanded! Between an invasion from beyond, old enemies teaming up with unlikely accomplices, and a threat to the Rangers’ powers themselves, will the two teams survive the onslaught, or will they need help from the most unexpected ally imaginable? Longtime Power Rangers architect Ryan Parrott (Rogue Sun) joins forces with superstar artist Dan Mora (World’s Finest, Once & Future) to deliver the follow-up to the hit crossover!   Collect all four connecting main covers by Dan Mora, a very special double gatefold variant, and don’t miss this collector’s opportunity as TMNT co-creator Kevin Eastman and Freddie Williams II team up for a variant cover for every issue in this series! But that’s not all, a Deluxe Edition will include 1 of 10 intermixed trading cards and an EXCLUSIVE print celebrating this epic crossover event!In Shops: Dec 28, 2022 SRP: $5.99