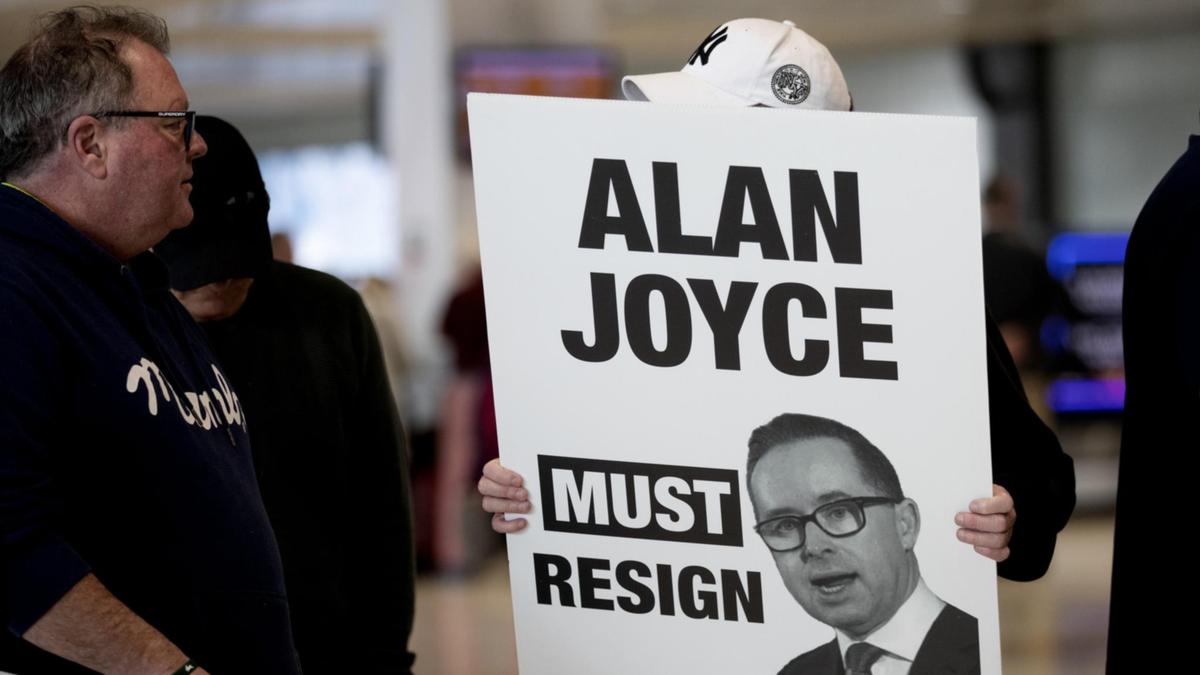 When most Australians think about flying, only a few airlines come to mind.

If you’ve travelled, chances are you’ve been on board a plane with the red kangaroo logo.

But Qantas, the once-lauded airline, is under increasing pressure, with customers publicly fuming after a spate of lost bags, delayed flights and a flare-up over a lack of vegetarian meals on some flights.

While things might seem grim for the national carrier, there’s one factor that guarantees Qantas will make it through these turbulent times.

There was huge uproar this week when word spread Qantas had stopped offering vegetarian and vegan meals on some domestic flights.

When a well known businessman requested a vegetarian dinner after a long day of working, Qantas staff told him the only option on board was a chicken pie.

He then took to social media, expressing his disappointment and urging Qantas to rethink their “money-saving” strategies.

“If Alan Joyce won’t change his decision on this, maybe it’s time for the Qantas board to take him off the menu,” he said.

After the public outcry, Qantas has since reinstated vegetarian meals on domestic flights.

Similar outrage occurred when a photo posted to Twitter showed an empty Qantas tarmac – empty except one lonely suitcase lying in the middle.

In July, The Guardian reported one in ten pieces of luggage were getting lost or weren’t loaded onto their domestic flights leaving Sydney Airport.

“Bags aren’t making aircraft on time. Bags are being loaded onto aircraft incorrectly,” they said.

“Flights are being cancelled because crew are running out of hours to operate these flights in the time it would take to fix the issues.”

“We are red-lining, running at max capacity in a very dynamic, challenging environment. There’s a lot that can go wrong.”

Earlier this month, the Australian Competition and Consumer Commission revealed the cost of a discount domestic airfare had increased by 56 per cent.

Speaking after the airline released its full-year results for 2022, Mr Joyce confirmed Qantas would increase domestic airfares by 10 per cent and international fares 20 per cent, passing on the rising cost of fuel to customers.

While the airline’s annual report had bad news for customers, it was more positive for Mr Joyce.

Including the value of shares he is entitled to, as well as other benefits, the total value of his pay packet for 2022 is $5.7 million.

WHY QANTAS WILL SURVIVE

Despite their many recent issues, Queensland University of Technology marketing professor Gary Mortimer said Qantas will continue to be a respected and supported brand for Australian consumers.

Professor Mortimer said the size and history of the brand ensured Australians would not completely turn their backs.

“Qantas, like our big supermarkets, are still a highly trusted brand,” he told NCA NewsWire.

Prof Mortimer said the airline was facing similar challenges to other airlines as fuel costs rise and the world takes to the skies again after the pandemic.

“Qantas, like any business is challenged to attempt to run an efficient business while also catering for a wide variety of consumer requests,” Professor Mortimer said.

“It is challenged with trying to balance the nature of satisfying every customer alongside the commercial costs of doing so.

“In an ideal situation, whether you’re an airline, restaurant, supermarket, you like to provide a whole range of variety of products, but with that comes significant costs.”

Professor Mortimer said Qantas’ unpopular decision to limit the variety of meals on-board may have been more of a “commercial decision rather than a consumer centric decision.”

Professor Mortimer defended the airline, claiming Qantas is not alone in dealing with staff shortages and missing baggage issues.

“While passengers are frustrated, I don’t think most of them understand the challenges of running an airline, of having to find staff, engineers, ground crew, pilots and flight attendants,” he said.

“Qantas is not alone in this, this is exactly the same frustration and challenges facing all businesses with staff shortages.”

“If people think they’ve contracted Covid, they have to stay home, doesn’t matter if they’re a pilot, co-pilot or flight attendant.

“And those types of roles, you can’t just recruit tomorrow so it is challenging to do that,” he said.

He said perceptions of the business can be skewed by what passengers see on social media, with disgruntled customers often posting about bad experiences without delving into the causes behind the issues.

“Sometimes consumers get caught up in the narrative of what’s being said on social media, and people don’t understand these frustrations of cancelled flights and lost baggage,” he said.