Will the worsening pandemic in the US halt the vaccine rally? 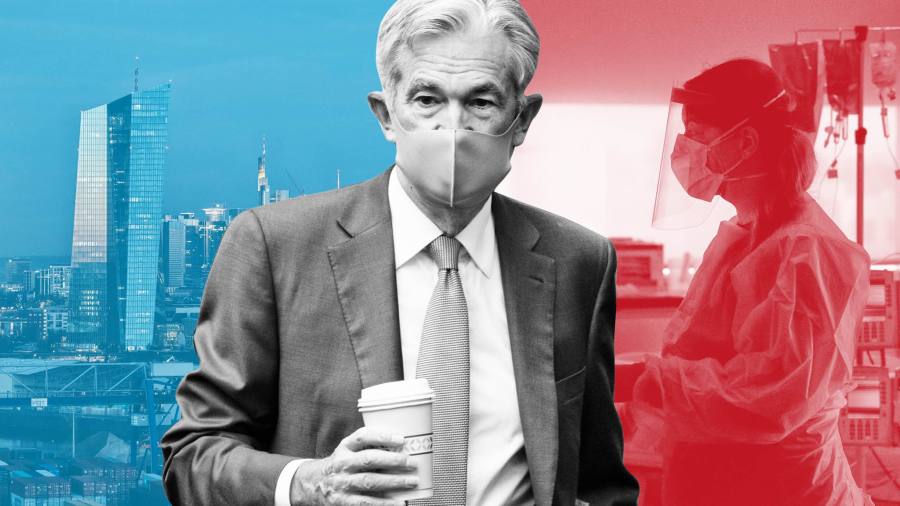 Will the worsening pandemic in the US halt the vaccine rally?

Just days before America’s Thanksgiving public holiday, daily coronavirus cases in the country are at record levels and the average fatality rate has reached its highest since May.

At a time of year known for bringing families together, health experts and public officials are urging Americans not to travel in an effort to stop coronavirus from spreading even further. New York state governor Andrew Cuomo warned there could be a “tremendous spike” in cases after Thanksgiving.

Economists are also concerned. “The Thanksgiving holiday could prove to be a super spreader event which could potentially affect activity data in December and January,” threatening economic growth, said JPMorgan’s chief US economist Michael Feroli.

For now, Wall Street appears unperturbed. US equity benchmarks are hovering near record highs, encouraged by this month’s breakthroughs in the hunt for a vaccine.

But strategists are increasingly anxious about the economic damage being caused by the surge in Covid-19 cases, and measures put in place to stop it. Last week, new jobless claims increased for the first time in five weeks. A growing number of states and cities have moved to place restrictions on bars and restaurants, shift schools to remote-only learning and tighten limits on social gatherings. California has introduced a late-night curfew in its hotspot counties: Massachusetts and Ohio have done similar.

Adding to investors nerves last week was a public spat between the Federal Reserve and the Treasury over the latter’s refusal to extend some of the market-support facilities put in place since the crisis.

“With the Covid-19 crisis worsening and activity slowing in the absence of fiscal aid, the decision to curtail the Fed’s firepower could unsettle markets and exacerbate economic stress,” said analysts at Oxford Economics. Peter Wells

Investors will be given the clearest indication of how hard the second wave of coronavirus infections and lockdowns have hit eurozone business activity when a widely watched survey is published on Monday.

The IHS Markit flash eurozone composite purchasing managers’ index is expected to point to a further decline in business activity in November, as the latest restrictions imposed by many governments weigh on consumer spending and corporate investment.

The overall PMI score — combining both services and manufacturing — is predicted to drop to 49.3, down from 50 in the previous month, according to consensus economists’ expectations calculated by Reuters.

It would be the first time since June that the reading has fallen below the critical 50 mark that indicates a majority of businesses are reporting a contraction in activity compared with the previous month.

The data — also expected to show a continued decline in services activity and a slowdown in the manufacturing sector — will increase the pressure on the European Central Bank to consider further monetary stimulus at the December meeting of its governing council.

Christine Lagarde, president of the ECB, warned last week the economy was “expected to be severely affected by the fallout from the rapid increase in infections and the reinstatement of containment measures, posing a clear downside risk to the near-term economic outlook”.

Jack Allen-Reynolds, senior Europe economist at Capital Economics, said the high-frequency data he tracked each day, such as for traffic congestion and public transport usage, took “a marked turn for the worse” in November, particularly in France and Italy.

“All of this adds to the evidence that eurozone GDP will contract in the fourth quarter,” he said. Martin Arnold

Is the Fed primed to tweak its asset purchase programme?

Minutes from this month’s Federal Reserve monetary policy meeting will be published on Wednesday, giving investors a glimpse into how seriously the US central bank is considering providing further stimulus in light of the surge in coronavirus cases worldwide.

While the Fed did not change its policy stance at its meeting in early November, chairman Jay Powell acknowledged that officials had a “full range of discussions” around “adjusting [the] parameters” of its asset purchase programme.

The central bank is buying Treasury securities across all maturities at a monthly pace of $80bn as part of its pledge to purchase an unlimited quantity of US government debt to keep financial markets functioning smoothly and shore up a recovery that economists fear may be losing momentum.

One suggestion that has gained popularity among investors is for the Fed to focus most of its buying on longer-term debt. Such a measure would help in part to offset the enormous amount of supply hitting the market as the Treasury department seeks to fund further economic relief measures. This, investors say, would ensure borrowing costs remained in check.

Steven Englander, head of North America macro strategy at Standard Chartered, said the Fed could even go so far as to boost the aggregate size of its Treasury purchases by 50 per cent — to $120bn a month — before its next meeting in mid-December.

“In our view, it may make such a calculation in coming weeks, with Covid-19 intensifying and fiscal stimulus caught in the Bermuda triangle of a partisan, lame-duck Congress,” Mr Englander said. Colby Smith