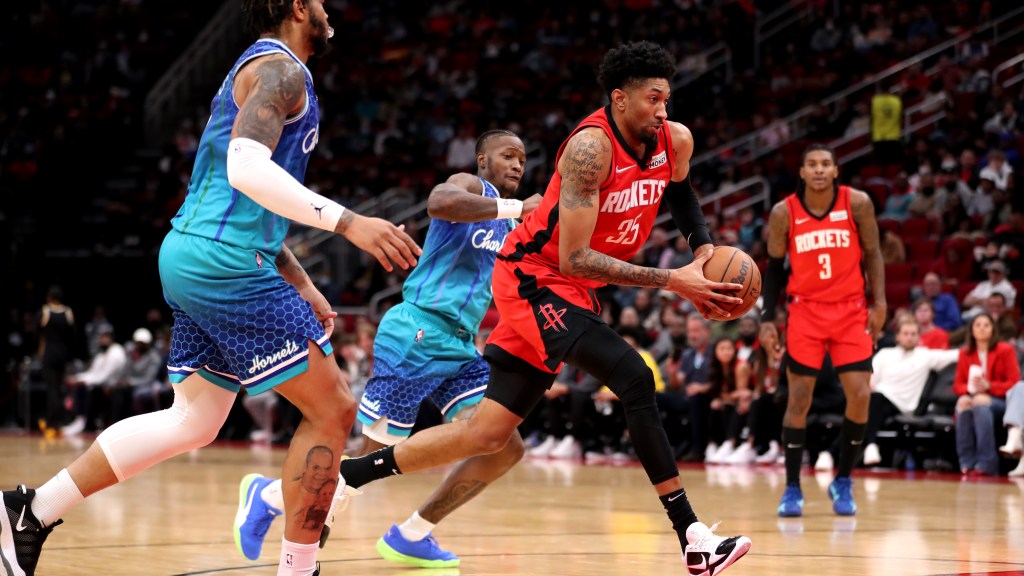 On the first offensive possession for the Houston Rockets on Saturday night against the Charlotte Hornets, guard Kevin Porter Jr. dribbled at the top of the key, watching all the action unfold in front of him. Eric Gordon comes up to set a soft screen and then floats out towards the three-point line.

Porter sees him but keeps his dribble, with the rest of his teammates in his view, knowing that the play call has a second option if Gordon is unavailable to receive the pass.

Trailing behind Gordon on the first screen is forward Christian Wood, who sets a hard screen on Hornets Gordon Heyward and then rolls toward the basket. Porter delivers a left-handed dart to a wide-open Wood, who finishes the play with an emphatic dunk.

The execution of that play can be attributed to the film study by Porter and Wood becoming more vocal with his point guard during the games.

“If I miss him, he is going to tell me that I missed him,” said Porter about the exchanges he has with Wood after a missed opportunity. “Me and C-Wood just laugh at film. We watched a lot of film of prior pick-and-rolls from all the games. When I came back, I told him I want to make an emphasis on running two-man and just getting good reads and good looks.”

One key element to the growth over the last two games for Porter has been his ability to read the floor better. That allows plays to develop and cuts down on his turnovers. He attributes that to an unfortunate injury he sustained earlier this season that held him out of three straight games.

“I was able to sit on the side and observe how we have been playing,” said Porter who finished Saturday’s game with 12 assists and only four turnovers. “Just learning my reads. I struggled with those earlier in the season and with that injury it gave me an opportunity to sit down and slow the game down and put things into perspective.”

Wood, who had a season-high 33 points against the Hornets, likes the on-court chemistry he is developing with Porter. During his postgame press conference, he expressed how effective the two have become on the court and how Porter is making the right passes and reads earlier on in the shot clock.

Rockets head coach Stephen Silas has also noticed the chemistry that Wood and Porter have developed and the growth of the two players. One reason the Rockets have been so successful during the two-game winning streak is the change in the starting lineup that removed center Daniel Theis. That move created more space in the lane for the two to operate.

“You saw him (Porter) controlling the game, finding Wood on the rolls, finding Eric (Gordon) on the flares, going downhill, getting to the free-throw line at the end,” coach Silas said. “That’s big-time stuff for a 21-year-old trying to learn how to play the point guard position.”

The Rockets will seek a third consecutive win when they take on the Oklahoma City Thunder on Monday night at Toyota Center.

Intensity the key for Root in ‘crucial’ Ashes practice