World Cup 2022: Why is there so much more added time than normal? | Football 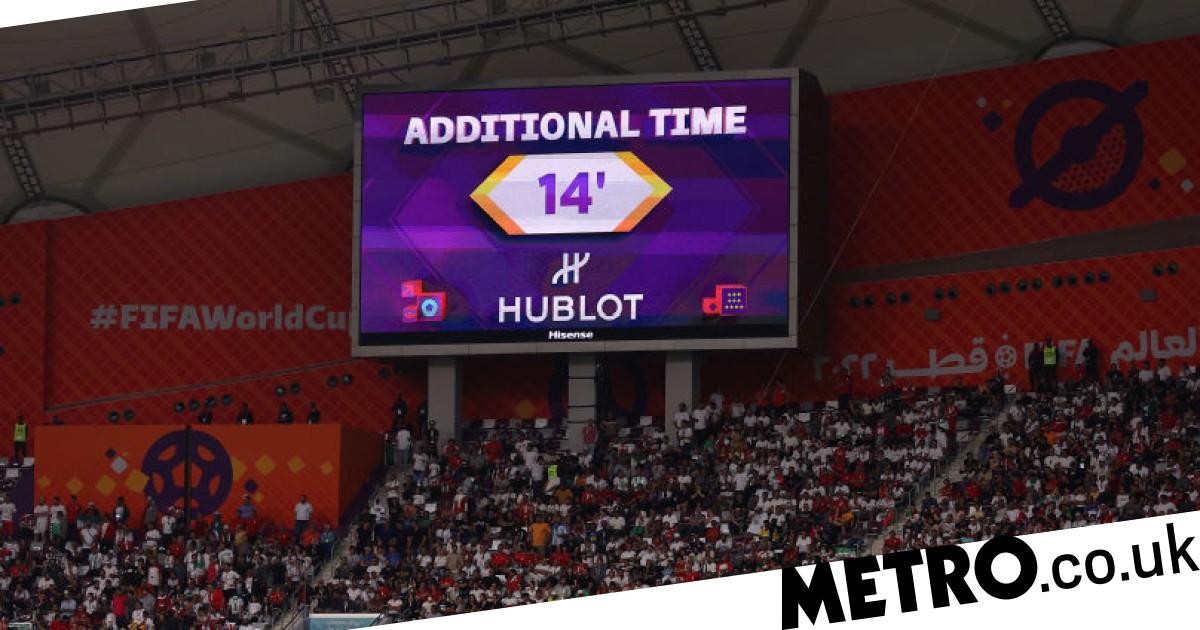 Every World Cup tournament has its trademarks – from the vuvuzelas and Jabulani ball in South Africa to Diana Ross’ penalty in the opening ceremony of USA ’94 – and it appears Qatar 2022 will be remembered for its enormous amounts of added time.

After just four matches, there has already been nearly 65 minutes of combined added-on time with England’s opening game against Iran lasting an astonishing 117 minutes and 16 seconds.

The first half alone nearly lasted an hour after Iran goalkeeper Alireza Beiranvand required lengthy treatment following a clash of heads before trying – and failing – to carry on playing, while there were several VAR checks and another lengthy stoppage in the second period after Harry Maguire was treated for a head injury.

As a result, Mehdi Taremi’s late penalty – which came with 102 minutes and 30 seconds on the clock – is now the latest World Cup goal ever recorded excluding extra time.

Typically, supporters are used to seeing three or four minutes of added-on time in the Premier League and Champions League but for the World Cup FIFA have decided to clamp down on time wasting and increase the amount of time the ball is in play.

Additional time will be added on for any and all injuries, VAR interventions, substitutions, penalties, bookings and any instances where the referee perceives a player to be trying to deliberately run down the clock or time waste.

Speaking before the tournament, former Italian referee Pierluigi Collina – who is now chairman of FIFA’s referees committee – revealed that fourth officials would be encouraged to track time lost in stricter fashion than previously.

‘What we already did in Russia [2018] was to more accurately calculate the time to be compensated,’ Collina told ESPN.

‘We told everybody to not be surprised if they see the fourth official raising the electronic board with a big number on it, six, seven or eight minutes.

‘What we want to do is accurately calculate the added time at the end of each half. It can be the fourth official to do that, we were successful in Russia and we expect the same in Qatar.

‘I am not talking about VAR intervention, this is something which is different and calculated by the Video Assistant Referee in a very precise way.

Incredibly, the four single halves with the most stoppage time on record (since 1966) in World Cup matches all occurred on Monday, with the 14 minutes and eight seconds added on in the first half of England’s clash with Iran taking top spot.

FIFA have faced plenty of flack recently but their stance on added time appears to have won plenty of admirers, with Jamie Carragher tweeting: ‘Enjoying the amount of time that is being added on by the officials. There is too much time wasting in football!’